This month in pictures

From Trojan horses that help sneak therapeutics past the blood–brain barrier to advanced brain models built on microchips, we celebrate innovative science in breathtaking images. 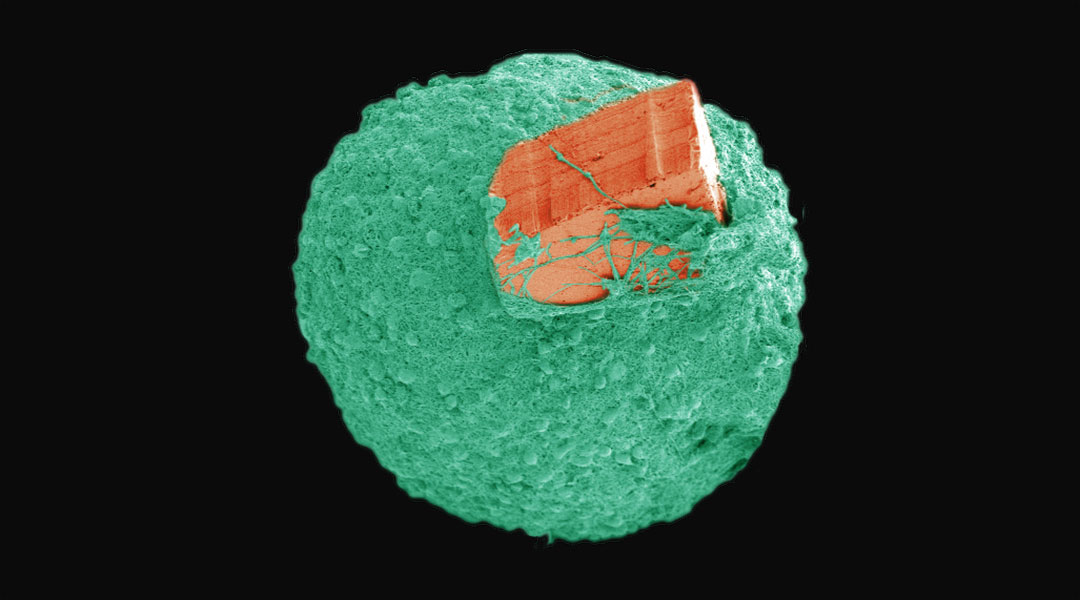 2020 was certainly a year like no other, but in the midst of its turmoil are examples of humanity’s ability to come together and achieve the impossible. This in itself is the very essence of science: trying to make sense of the world, find its beauty, and create solutions and innovations that will change lives.

Our first This month in pictures feature of 2021 highlights some exemplary science images selected by our editors, which were published in our journals last year.

Delivery of therapeutics to the central nervous system is challenging due to the presence of the blood–brain barrier, but taking advantage of biomolecules that already have this ability is relatively under-explored. To fill this gap, researchers led by Britta Engelhardt of the University of Bern and Harm‐Anton Klok of École Polytechnique Fédérale de Lausanne (EPFL) sought to decorate T cells with nanoparticles, resulting in the immobilization of ≈105 nanoparticles per T cell as shown in the image above. In vitro models proved their ability to carry the nanoparticles across the blood–brain barrier in an exciting proof-of-concept demonstration published in Advanced Healthcare Materials.

A zoo of hidden figures

In a study published in Advanced Functional Materials, a collaborative team of researchers created a biphasic copolymeric membrane consisting of gelatin and poly(ε‐)caprolactone that acts as a model and mimic of the complex environment and physiology of the lung. While this image shows A549 cells successfully cultured onto their membrane (blue is DAPI (nucleus) and green is F-actin cytoskeleton), lead author Ali Doryab can’t help but identify the shapes of different animals. Can you find the rhino, fish, hedgehog, and snail?

A microscale festival of lights

Airborne nitrite particles are a significant safety risk in industrial settings. In Advanced Science, Xincun Dou and co-workers developed an extremely sensitive technology for detecting this hazardous material. This image shows the detector under UV light after exposure to a range of different fluorescent materials; nitrite particles as small as 2 micrometers in diameter can be seen here fluorescing green.

The precise structure of a material at the nano- and micro- scale can have a significant impact on the behavior of its bulk material. Understanding structures at these scales requires precise imaging technologies. In Advanced Materials Interfaces, Benjamin Apeleo Zubiri, Erdmann Spiecker, and co-workers explore the capabilities of correlative 360° electron tomography and lab-based nano X-ray computed tomography for 3D analyses of tiny particles with nanometer resolution.

Brain organoids show exciting promise in modeling human brain development, diseases, and possible therapies. A team of researchers led by Aziliz Lecomte and Luca Berdondini from the Italian Institute of Technology (IIT) have taken a step forward in overcoming some of the drawbacks of growing them. In a study published in Advanced Biosystems, they created self-standing biosensing microdevices capable of achieving seamless tissue integration during the cell growth of neural spheroids derived from embryonic mouse cortical cells. Read the news highlight.

To avoid damaging living cells, microrobots controlled by optical tweezers can be used for manipulation of cells or living organisms on the microscopic scale. This SEM image shows one such robot, created by Dandan Zhang of Imperial Collage London and Guang-Zhong Yang from Sthe hanghai Jiao Tong Universityand and published in Advanced Optical Materials.

Enhancing the delivery of CRISPR to cells

CRISPR made headlines this year and research in this area has exploded in the last decade with the promise treatments for a number of genetic disorders. However, challenges remain, such as the safe delivery of CRISPR to specific locations in the body. In this study published in Advanced Therapeutics, researchers Jessica Rosenholm, Yilai Shu, Hongbo Zhang, and their teams achieve direct and effective intracellular delivery of CRISPR/Cas9 plasmids using functionalized mesoporous silica nanoparticles. The above images shows U2OS cells treated with their CRISPR-nanoparticle system.

What looks like a (relatively) normal coil is actually a micrometer-sized spiral waveguide created by Dawn Tan and co-workers from Singapore University of Technology and reported in Advanced Optical Materials. The structure is one of many photonic building blocks made using two‐photon polymerization laser lithography, which the researchers hope will allow them to one day make small devices with high data transmission rates and lower power consumption drives.

Turn that funky record on

Polarized light optical microscopy brings us this stunning image of a microsphere made from a chromonic liquid crystal doped with L‐alanine and Oxazine725 in a polymer matrix. In Advanced Functional Materials, Maria Penelope De Santo, Federica Ciuchi, and co-workers investigate the spontaneous chirality demonstrated by chromonic liquid crystals when confined in curved geometries.

This braided structure is the work of Jacob Zbinden, Christopher Breuer, and their team at the Nationwide Children’s Hospital, Ohio, USA. What looks like yarn are actually braided poly(glycolic acid) fibers coated with poly(glycerol sebecate), which act as scaffolds for tissue-engineered vascular grafts (TEVGs). The effect of different braiding patterns in the scaffold on the development of the TEVGs is investigated, with the hope that these scaffolds can be optimized for clinical applications. This beautiful image featured on the front cover Advanced Healthcare Material’s most recent special issue, Biofabrication 2019, which features papers based on presentations given at the 2019 annual meeting of the International Society of Biofabrication.

Modelling injury on a chip

Understanding how tissue recovers from injury is important therapeutic and treatment development. However, studying the underlying physiological processes is difficult without accurate models that mimic the complex dynamics of hemostatic responses. To address this, a research team led by Laurence Brass and Dongeun Huh from the University of Pennsylvania reported a new microengineering approach for in vitro modeling of hemostasis: a human vascular injury-on-a-chip (pictures here). Their study was published last year in the journal Small.

Pachyrhynchus sarcitis (shown here) are flightless weevils that have distinct colored patches on their dark elytra, which are the result of differently oriented 3D photonic crystals within their scales. In Advanced Optical Materials, Hui‐Yun Tseng from the National Taiwan University, Silvia Vignolini from the University of Cambridge, and their teams explore the hereditary characteristics of these photonic crystals to understand how structural coloration is inherited and how it can be used to redesign the optical response of living organisms.

See more in this series “Science in pictures“