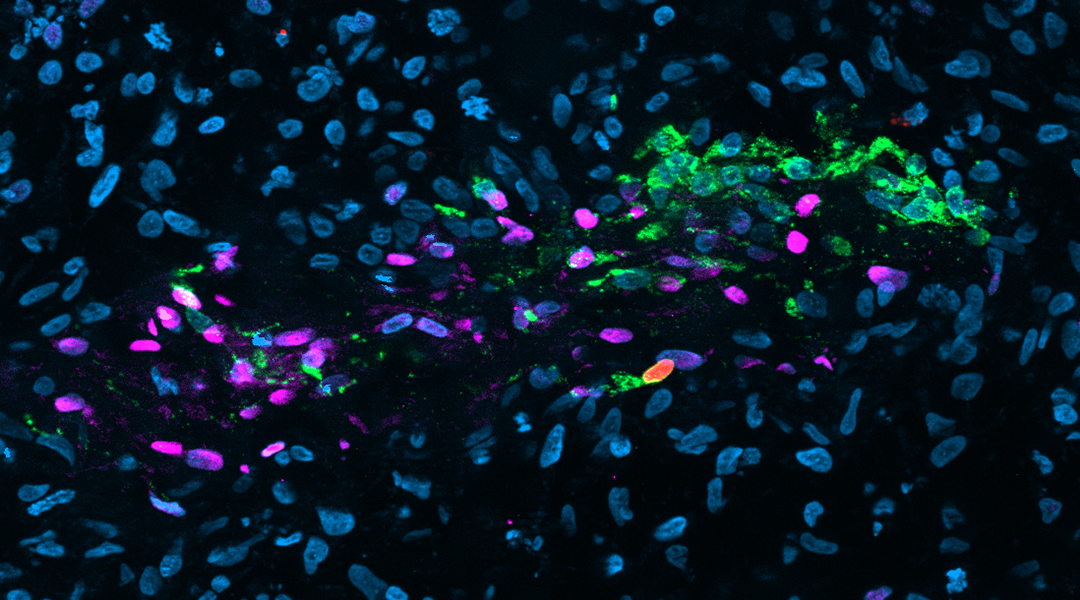 This edition of Science in pictures features our favorite images cultivated from our journals and captures the beauty of innovative discoveries currently being made in a range of fields.

Fluorescent labels in this stunning confocal image reveal the details of an intestinal epithelial cell–immune cell coculture, after exposure to E. coli for 24 hours.

To properly understand host–microbe interactions, Róisín Owens and colleagues at the University of Cambridge and Moredun Research Institute, Edinburgh, established these stable cocultures to create a 3D in vitro model of vertebrate intestinal epithelium interfaced with immune cells.

Current homeostatic and pathophysiological models of the gut–microbiome axis miss key biological components that mediate the crosstalk between host and microbe. Their model, published in Advanced Biology, is shown to function as a platform for systems biology studies, including testing host–microbe–parasite interactions.

Textile strain sensors capable of monitoring vital signs and movement have great potential in health and sports, but making them sensitive enough and integrating them effectively into clothing and other wearable devices is tricky.

In a study published in Advanced Materials Technologies, a team from Donghua University led by Yanping Liu and Yumei Zhang created this stretchable double-covered conductive yarn that overcomes bottlenecks keeping textile strain sensors from seeing widespread application. The sensor has a high sensitivity of 2% strain detection limit, and excellent durability withstanding 10,000 cycles, and performing even when wet or after repeated washing, bending, or rubbing.

These pendants please the eye while they dehumidify. The challenge with traditional dehumidification methods is that they require significant energy to operate and are hindered by a fundamental challenge as when water-absorbing materials are exposed to the air, they sometimes become inactivated by water build up on their surfaces.

In Advanced Materials, Wenshuai Chen of Northeast Forestry University in Harbin, China, and Guihua Yu from the University of Texas at Austin have designed a moisture absorbing gel called N-MAG, which contains LiCl and nanocellulose assembled into porous networks. The nanocellulose transfers water captured on N-MAG’s surface and brings it inside the material, eliminating water accumulation and enabling high-rate moisture absorption.

The origins of olfactory neurons

In vertebrates, the origin of olfactory neurons and non-neuronal cells called glia remains unknown and controversial. However, research published in Natural Sciences led by Marianne Bronner of the California Institute of Technology sheds light on a possible solution.

During embryonic development, many cell populations contribute to the various cell types of the olfactory system. Therefore, using avian retroviruses, the team permanently labeled progenitor cells of the neural crest and olfactory placode and tracked them during early development. The team was surprised to find that it is actually a dual contribution from both cell types that leads to sensory neurons in the nose and gonadotropin-releasing hormone neurons migrating to the olfactory bulb.

Organic field-effect transistors (OFET) are important building blocks in flexible and transparent electronics. However, increasing the number of number and density of transistors in a given device requires expensive and complication lithography techniques, which limit their potential in commercial applications.

In Small, researchers led by Paddy Chan of the University of Hong Kong get around this by using wrinkled structures to improve electrical performance. This SEM/EDS image of their wrinkled OFETs shows the surface of a polystyrene shrinkable film, which provides a ~70% reduction in area and improved performance to boot.

The spectrometer is one of the most important instruments for convenient and non-destructive characterization and analysis. However, most high-performance spectrometers are not portable or able to capture data in the field, such as in environmental analysis or crop monitoring.

To solve this problem, in Advanced Materials Technologies, a team led by Bin Dong of Dalian Minzu University and Yurui Fang of Dalian University of Technology created a microspectrometer based on a carbon nanocoil and plasmonic gold nanoparticles. Light gets dispersed along the nanocoil’s helical structure, affording a 40–80 nm resolution and a large bandwidth of at least 400 nm obtained in the visible-near-infrared range. The team is hopeful that their technique will provide new experimental approaches for polarization and dynamic object polarization analysis.

On-surface synthesis is a unique tool for growing carbon nanomaterials with precision on the atomic level. One reaction that is commonly used to link singular molecules together is dehalogenative aryl–aryl coupling, though it sometimes fails to produce the desired materials due to steric repulsion.

One way to circumvent this, as published in ChemPhysChem, was reported by José I. Urgel, Marco Di Giovannantonio, Roman Fasel, and their co-workers in which an additional linker was used to overcome the problem. The team is confident that this bottom-up approach will provide a new tool for creating low-dimensional carbon-based nanomaterials from previously inaccessible precursors. In the image here, you can see a visible polymer segment where the hexagons and pentagons are six- and five-membered carbon rings.

A refined approach to the method, recently published in Small, was introduced by Jue Zhang of Peking University and co-workers in which perfluorobutane nanodroplets were used to induce microbubbles to create an echogenic signal. The images were used to resolve blood vessels in vivo, well beyond the wave diffraction limit. The method is a valuable addition to the toolbox of non-invasive imaging technologies for tumors and vascular-related diseases.

The mechanisms of RNA interference

To do this, Kristen Panfilio and co-workers used a RT-qPCR strategy capable of distinguishing double-stranded RNA (dsRNA) from endogenous mRNA along with timecourse assays and genomic analysis to determine the molecular mechanisms of dsRNA transmission during systemic RNAi in insects. This study provides new insight into how RNAi can be passed from parent to offspring and enables the development of further research methods as well as new insights into pest control.

Nanomaterials can be used enhance the effectiveness of conventional drugs. However, their development is challenging due to the complicated nature of nanomaterials used in the formulation.

Which way does the solar wind blow?
Decoding the language of cells with virtual modeling
Nature's metal organic frameworks
Science in pictures