From boosterless vaccine platforms to goopy 2D inks and color-changing crystals, here are some of the most striking images collected from our journals. 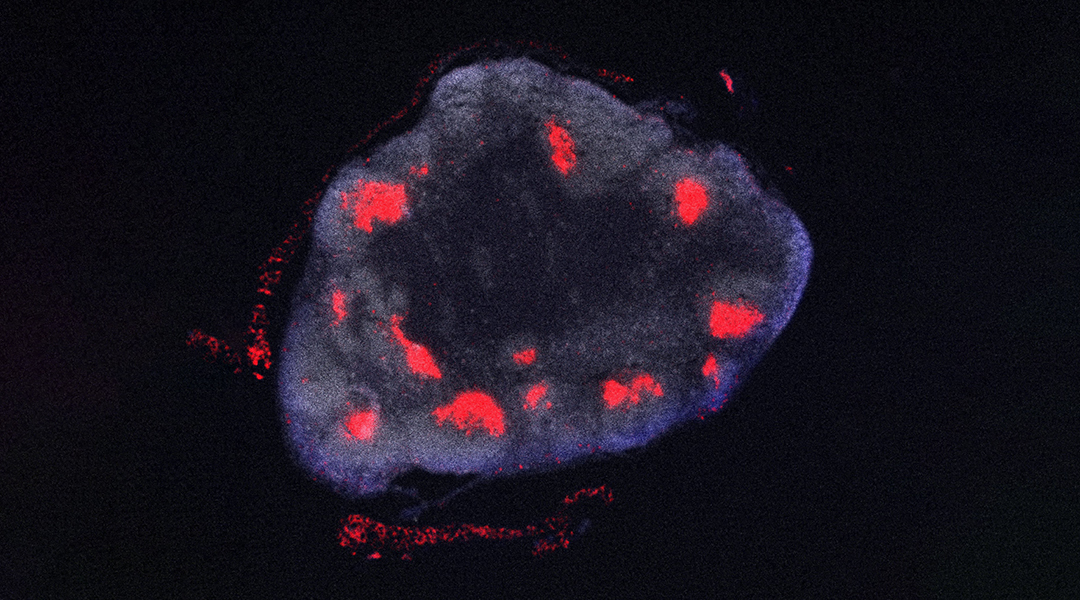 Innovation continues to reign in this edition of Science in pictures. Over the last few months, our editors have scoured our journals, seeking out the most brilliant, eye-catching images for this gallery.

In this collection, where art meets science, disciplines ranging from health and biology to materials and electronics are represented in captivating imagery and graphic display. While the experimentation and problem solving that goes into generating these final products is painstaking at times, to be able to experience this visually allows us to take a step back and appreciate how creative and stunning science can be.

We hope you enjoy this gallery as much as we did putting it together!

This beautiful and colorful spiral is a soft microactuator fabricated by Larisa Florea and Albert Shenning and their teams at Trinity College Dublin and Eindhoven University of Technology.

Soft actuators are made from stimuli-responsive materials that can change shape or functionality upon external stimuli, such as light and heat. They are integral to the burgeoning field of soft robotics: machines that do away with things like hinges, cogs, and pistons, and instead rely on the material itself to move and bend as desired.

In this work published in Small Structures, the microactuators shown here are fabricated using liquid crystalline photoresists. More examples feature on the front cover of this year’s Small Structures Issue 2.

Photonic crystals are being extensively explored as a replacement for pigments and dyes, and as coloring elements in printing, painting, sensing, and anti-counterfeiting applications. This beautiful image, published in Advanced Materials by Yadong Yin from the University of California, Riverside and colleagues, shows dark-field optical microscopy of their new photonic pigments featuring highly tunable structural colors from the entire visible spectrum. The researchers were able to create them using magnetic assembly of nanorods, which formed into the crystals you see here.

A new kind of butterfly effect

Butterflies are a new source of inspiration for scientists in Advanced Materials. Xiaobao Cao, Stavros Stavrakis, Andrew DeMello, and colleagues have developed substrates to study structural coloration — color produced by sufficiently small structures interfering with visible light. A sewing needle on the left side of this image shows just how small their substrates are, where each colored square has a side length of 120 microns.

Tarred with the printing brush

Tar, treacle, or something else? This dark and gloopy substance is the focus of work by Jakob Heier and co-workers at Empa, Switzerland. Published in Advanced Materials, their work focuses on processing 2D materials into printable inks for the fabrication of functional devices.

The substance pictured above is a mixture of graphene 2D sheets and terpineol, creating so-called van der Waals- or vdW inks. These are shown to be much better than traditional means of processing 2D materials into inks, which often use lots of additives that impede the electronic properties of the final material. The authors hope that that vdW inks can be a universal strategy for effective printing with 2D materials. This image is also featured on the inside back cover of this year’s Advanced Materials Issue 4.

A hydrogel is a polymer that can be injected to aid in the repair of damaged tissue. This hydrogel, called a granular hydrogel, features rod-shaped particles within it, and Jason Burdick and colleagues sought out to determine if these shapes helped heal tissue. Typically, granular hydrogels feature spherical particles, but Burdick et al. found that the rod-shaped particles were a promising new configuration.

Developing a vaccine with no boosters

One of the most common types of vaccine is a bolus, where a small amount of antigen is injected into the blood over a certain time period. While these vaccines are widespread within the field of medicine, one of their downsides is the need for booster shots in order to sustain a long-term immune response.

To combat this, new research published in Advanced Functional Materials describes the development of a new type of scaffold vaccine, which can greatly increase the window of protection, and this image depicts the increased immune response of a mouse six weeks after being injected with a scaffold vaccine.

Engineering micropores smaller than 100 µm in diameter in 3D-bioprinted scaffolds remains a significant challenge. This fluorescein-labeled printed lattice structure has quite carefully controlled pore size in this range, thanks to a strategy developed by Liliang Ouyang, Molly Stevens, and co-workers. Templated gelatin microgels were added to a bioink, and then after photocrosslinking of the resulting matrix, the microgels dissolved under physiological conditions, leaving the pores behind.

Preparing materials that can emit different colors and intensities is highly desirable though still quite challenging. A team led by Zikang Tang of the University of Macau and Dai-Bin Kuang of Sun Yat-sen University have sought to solve just this problem with a series of Pb−Sn alloyed single crystals equipped with two independent self-trapped excitons emitters.

The findings were recently published in Advanced Optical Materials. By tailoring the composition, excitation wavelength, temperature, or time gating, the researchers obtained multicolor luminescent crystals with color outputs that ranged from blue to red.

Microcapsules are tiny capsules made from polymers that promise a wide range of applications from electronics to drug release. In this fruity image by Jianbo Yin and colleagues at the Northwestern Polytechnical University, Shaanxi, China, silicon-based microcapsules are reinforced with poly-ionic liquids (PILs) and their morphology changes depending on their cooling rate after synthesis.

In the picture here — published in Macromolecular Rapid Communications — capsules made from a sandwich of PIL-SiOx-PIL are synthesized, and upon slow cooling, the outer layer of the PIL forms these globule-like structures on the SiOx surface, which the authors suitably refer to as “raspberry-like”.

A challenge in engineering viable, cell-laden hydrogels is rapid vascularization — the process of growing blood vessels into a tissue to improve oxygen and nutrient supply. In Advanced Healthcare Materials, Khoon Lim of the University of Otago Christchurch and colleagues created gelatin-norbornene (Gel-NOR) to solve this problem. It was investigated as a vascular bioink with tailorable physico-mechanical properties that promoted the self-assembly of human stromal and endothelial cells into microcapillaries.

The study highlights an exciting three-way interplay between bioink formulation, construct design, and cell-mediated response that can be exploited towards engineering vascular tissues.

Porous graphitic foams are important for developing flexible electronic and electrochemical devices. In physica status solidi a (pssa), Li Shi of the University of Texas at Austin and team investigated how these devices can be enhanced by increasing the charge or heat transport between a 3D graphite network and the functional materials filled into the pore space. This SEM image shows in detail the material’s dendritic structure based on a commercial nickel-based foam.

“Double emulsions” are droplets inside droplets. They can be used for drug delivery, nanoparticle templating and high throughput chemistry, but making them in a controlled manner usually requires considerable expertise and specialized equipment. The ones shown in the image above were made by Nicolas Vogel and co-workers are made by simply vortexing oil and water in a centrifuge tube.

Recent improvements in foam fabrication techniques have opened the door to specialized applications like tissue engineering and membrane separations. These techniques, though, often result in foams with properties that are the same in all directions. Jeffrey Moore and co-workers use a frontal polymerization method to create foams like the one shown here, that are quite different along different axes.