Do masks need to be worn outdoors?

Though risk is lower, researchers debate whether people should be encouraged to wear masks outdoors or should efforts instead focus on reducing indoor transmission? 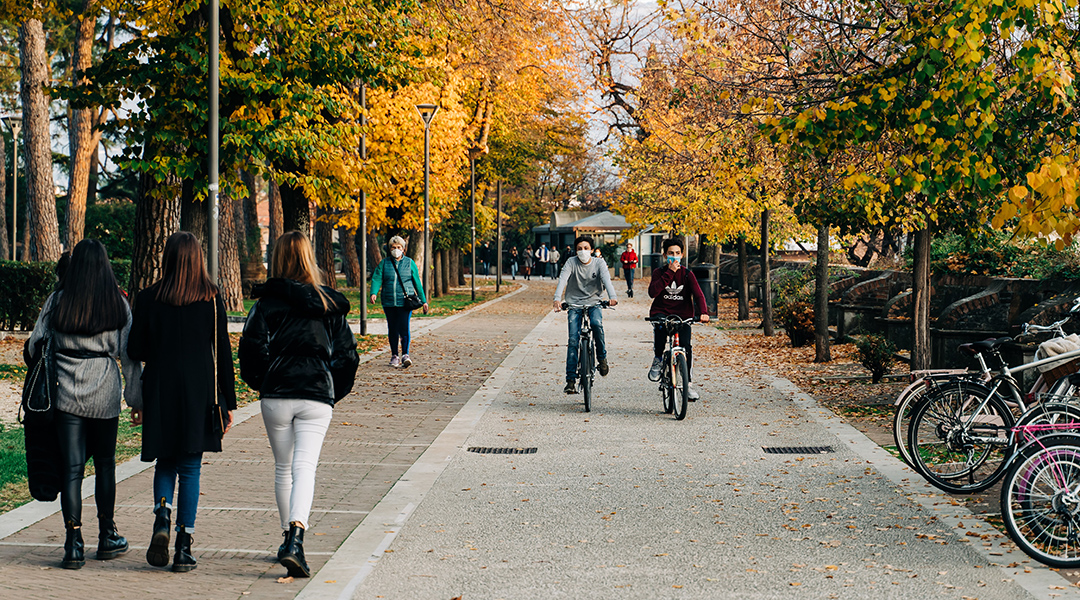 While data has proven that masks are an integral part of comprehensive strategies used to suppress the transmission of SARS-CoV-2 — especially in confined indoor spaces — there is still debate among experts regarding whether they need to be worn outdoors.

Research has shown that the risk of catching the virus in a outdoor setting is reduced because fresh air dilutes and evaporates viral particles, and the sun’s ultraviolet light helps to kill COVID-19 out in the open. However, some experts feel that encouraging outdoor mask wearing could help de-escalate some of the politicization around mask wearing in general.

“To be clear, we are not arguing that outdoor transmission represents a large transmission risk,” wrote Babak Javid, a physician and scientist from the University of California San Francisco, and his colleagues Manuel Bryant and Dirk Bassler from the University Hospital Zurich in a paper published in BJM. “Nor do we support policies that, for example, mandate masking outdoors when someone is alone or only with members of one household, since such scenarios, by definition, do not represent a transmission risk.

“Instead, we argue for a nuanced approach to mask wearing, where even outdoor mask wearing during the pandemic phase of COVID-19 is a normalized behaviour rather than a polarizing one.”

They point to data from the US and Germany showing that regions with public mask mandates have had a lower impact from the virus, while countries with early adoption of face coverings for the public also achieved an earlier acceptance of a social norm during the pandemic. This might also extend to further encouraging mask wearing indoors, where risks are greater.

They also point to data from potential “superspreader” events, which primarily (though not all) took place outdoors. “Summer 2020 witnessed worldwide mass protests in support of the Black Lives Matter movement,” they said. “At the time, many experts and pundits warned that such protests may fuel large transmission clusters […], but these fears were not realized. By contrast, the mass outdoor Sturgis Motorcycle Rally in South Dakota, USA, is considered to have been the trigger for a huge superspreading-type event that resulted in a devastating chain of COVID-19 transmission and disease.

One possible reason for the differences in outcome could be that the Sturgis Rally was associated with a lower compliance with measures that are associated with decreased transmission risk, such as mask wearing and physical distancing, bolstering the argument for these mandates even in outdoor settings.

But others are not convinced.

Dr. Muge Cevik from the School of Medicine at the University of St Andrews and colleagues argue that no confirmed superspreader events have been outdoors-only, with the Sturgis Rally and the White House Rose Garden outbreak having had sustained, multi-day indoor components. For instance, epidemiological investigation of Sturgis Rally found cases linked to restaurants and workplaces.

“Since outdoor transmission contributes very little to overall infection rates, efforts should instead focus on reducing indoor transmission,” they said. “Given the low risk of transmission outdoors, recommendations or mandates for outdoor masking may seem arbitrary, affecting people’s trust and sustained energy to engage in higher yield interventions, such as indoor mask use or staying home if sick.”

There is also the concern that this might incentivize people to stay indoors, which could worsen social isolation, as well as exacerbate inequity as a result of the pandemic. “People who have access to back gardens or can afford private transport to less population dense areas can enjoy the outdoors unmasked, while many others without such privileges or resources cannot enjoy fresh air or exercise unmasked in settings where mask use is universally mandated outdoors,” they said.

These mandates do little to tackle the real transmission risk or minimize socioeconomic inequities that contribute to disparities in infection rates as a result of race and income. Instead, they believe the public should be informed about the evolving scientific understanding of how transmission occurs and should be encouraged to be most vigilant in indoor settings, while noting the risk of prolonged and close contact outdoors.

Ultimately, outdoor mask mandates may be popular in some settings, as they are among the most “visible interventions” purporting to demonstrate decisive leadership, they conclude.