This month in pictures: June

Here, we take a look at some of the most intriguing scientific images published in June 2020. 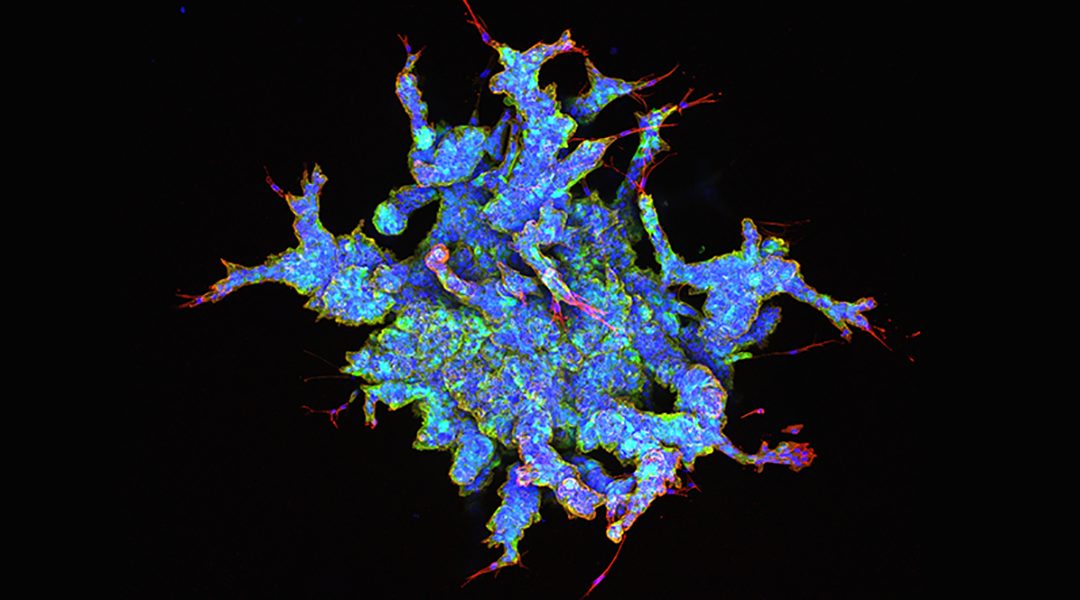 Continuing with our series This month in pictures, our editors took a look at some of the most dazzling images that were published in our journals last month. From fluorescent quantum dots to bridging nano-scale trenches, these images demonstrate research that is as practical as it is beautiful.

These rainbow-colored beads are an actual multi-stack of temporary color‐coded photos of floating microparticles, which were used to estimate the trajectories and velocity profiles of the flow of liquid in biomimetic device. The device, made by Vahid Hosseini, Viola Vogel, and co‐workers, is a pulsatile flow system to mimic the disease‐like extracellular matrix of vascular wall tissues and to gain insights into changes upon exposure to drugs taken to treat atherosclerosis or aneurysm. This beautiful image featured on the front cover of Issue 12 of Advanced Science.

Claudia Fischbach of Cornell University and co-workers create stunning images, such as the one above, using a new collagen-embedded multicellular spheroid platform. The study explores the connections between tissue microenvironment and obesity, which may have significant implications for breast cancer malignancy in obese patients. The article was published in last month’s Issue 23 of Advanced Materials.

Jesper Nygård and Thomas Sand Jespersen from the University of Copenhagen and their co-workers have created a new crystal growth platform for in situ growth of semiconductor/superconductor hybrids. The technique eliminates the need for etching, enabling full freedom in the choice of hybrid constituents. This image, which was featured as a cover in Issue 23 of Advanced Materials, shows an example of a patterned substrate with etched trenches and a series of silicon oxide “bridges”.

Vascular networks are central components of organ‐on‐a‐chip systems. Inspired by ubiquitous biological systems, such as leaf venation and circulatory systems, Jiankang He from Xi’an Jiaotong University, Xin Zhao from The Hong Kong Polytechnic University, and their co-workers devised a fabrication strategy to develop a biomimetic vascular system integrated with freely designed chambers, which function as niches for chamber‐specific vascularized organs. The study was published as part of Issue 22 in Small.

Jonathan Hopkins of the University of California, Los Angeles and co-workers report a scalable approach to assembling 3D arrays of microgranular crystals using holographic optical tweezers. Most impressively, the team demonstrated the ability to position microspheres within lattices in any configuration to control the behavior of new metamaterials for advanced applications. The study was recently published as past of Issue 25 of Small.

This is not the new PS5 controller, although if it were, it would need some nanoscale hands to manipulate it. A new technique allows these beautiful shapes to be made using graphene’s hydrogen atoms to confine electrons. This technique was developed by Iván Brihuega of Universidad Autónoma de Madrid and co-workers, and uses scanning tunneling microscopy to create defined patterns that can be created and destroyed at will.

This spectacular composite image shows the cell-imaging possibilities that are enabled by a new technique. Xiaohu Gao from the University of Washington and co-workers combine two powerful technologies; quantum dots and a technique for amplifying the fluorescence given off by imaging molecules, called signal amplification by exchange reaction (SABER). The technique can be used with molecules that fluoresce at various wavelengths, and amplifies the signals so that they become around seven times stronger than they would have been using older technologies.

The planks in this “woodpile” design are a mere 30 nanometers apart from each other. Frederik Mayer and Martin Wegener of Karlsruhe Institute of Technology, and their co-workers built this tiny object using a new material for 3D printing. The technique begins with a solution of building blocks then shining a laser on the solution to polymerize the building blocks, making a solid porous material. This technique allows fine control over design to be maintained from the nanometer to the millimeter scale.

The SEM image above comes courtesy of Roey Elnathan and Nicolas Voelcker at Monash University, and their co-workers, demonstrating the use of vertical silicon nanotubes (SiNTs) to manipulate cell growth and gene editing through intracellular delivery of small molecules. The large scale bar represents 10 µm, whilst the scale bar in the inset represents just 2 µm. These breathtaking structures at the microscale can be found in last month’s Issue 24 of Advanced Materials.