Advanced Science News takes a look at the life of Dr. Bill Frankland, pioneer in allergy medicine and inventor of the pollen count, who passed away on April 2, 2020. 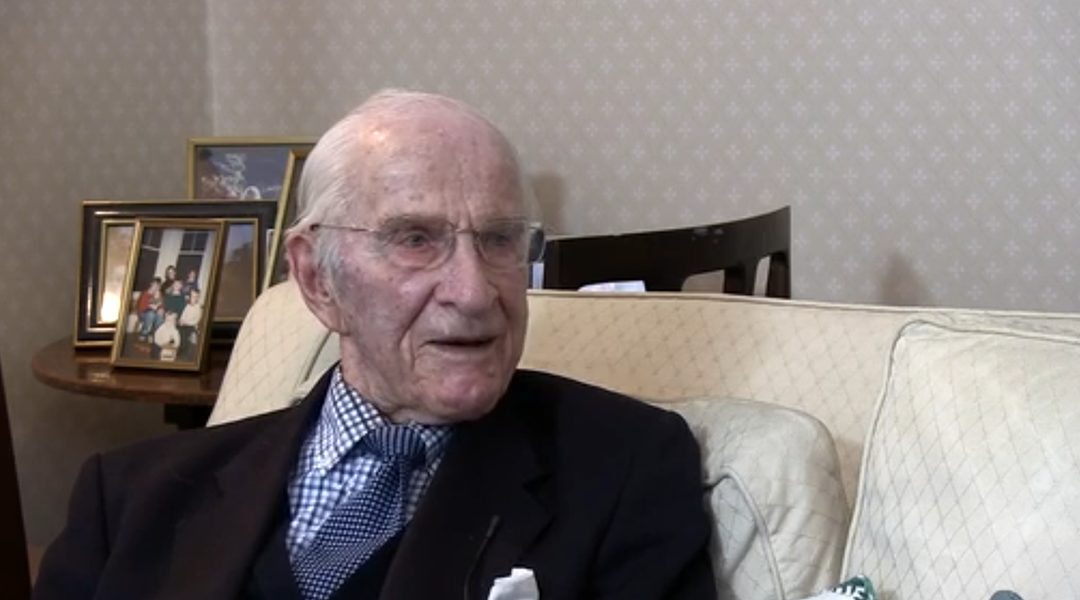 Dr. William “Bill” Frankland has yesterday sadly passed away at the remarkable age of 108. Affectionately called the grandfather of allergy, Frankland worked as an allergist and immunologist in a career spanning seven decades (even working for several years after turning 100), popularizing the pollen count in weather reports to help physicians and patients understand their triggers and symptoms. His career brought him into contact with other prominent scientists, having worked with Alexander Fleming.

Born in 1912 as Alfred William Frankland, he grew up in the Lake District, England and spent summers with his brother helping local farmers collect hay. In an interview first published on the Imperial College Healthcare NHS Trust blog he stated: “One day, I told my brother my eyes were itchy and I couldn’t go on. ‘You’re feeble,’ he said. It took me 30 years before I realised I had a real problem with summer hay fever and about 90 years to grow out of that allergy.”

He studied medicine at The Queen’s College, Oxford and St Mary’s Hospital Medical School, now part of Imperial College London, and served in the Royal Army Medical Corps during World War II during which he was captured and held as a POW in Singapore for three and a half years.

When he returned to England, Frankland returned to work at St Mary’s Hospital where he initially took a part-time opening in the hospital’s allergy department, but fell in love with the practice and remained an allergist for the rest of his career. The allergy clinic at the west London hospital is now named after him.

During the 1950s, Frankland worked as a research assistant to Alexander Fleming, the world famous scientist who discovered the first antibiotic, penicillin. Fleming won the 1928 Nobel Prize and was a global celebrity, and Frankland recalls that part of his role as clinical assistant was to sift through the bundles of letters received daily. But the two had an amicable relationship. “Every morning for two years I had to go and see him at 10am. We were meant to discuss patients but we talked about everything else,” said Frankland.

Fleming also provided support for Frankland in his own research endeavors. “Fleming supported my research while I worked for him which led to one of my proudest moments,” he said in an interview with Imperial College London on the occasion of his 108 birthday this year. “At the time, it was thought that autologous bacterial vaccines — vaccines made from an individual’s own throat bacteria — could treat certain types of so-called infected asthma. I thought it was all ballyhoo, so I went to Fleming and said I wanted to do a double-blind placebo-controlled trial to test their effectiveness. He gave me the go-ahead to do it although it was very expensive due to the high costs involved in producing autologous vaccines.

“The placebo injections gave exactly the same result as the very expensive ones. I was afraid my chief might sack me! After that study was published I was invited to lecture on it all over the world and at the time I was a junior doctor, not a consultant. I’m still very proud of that.”

He became an expert in asthma and hay fever, and invented the broadly known pollen count. “Of course, most people who know my name know me because of the pollen count. My patients were not particularly reliable in reporting the date of the start of their allergic reactions […] so, I set up a pollen trap at St Mary’s Hospital, on the roof of what used to be the nurses’ accommodation to identify different types of pollen in the air. From that work, I created a pollen count system and tracked pollen counts every day with my team to help determine what triggered my patients’ allergic reactions. We thought other people might find it useful, so we suggested two newspapers publish the count each day. We found ourselves making a call to the papers each morning to report the pollen count! Today the pollen count appears on the radio, on television and in newspapers with the weather forecast.”

Frankland retired from medicine at the age of 65, but continued working in a consultancy role in the Department of Medicine at Guy’s Hospital for an additional twenty years. Even after turning 100, Frankland remained active within the academic community, attending conferences and continuing to publish scientific findings. At the age of 100, he published “100 years of allergen immunotherapy” and co-authored a study at the age of 104. He was also honorary president of the Anaphylaxis Campaign, a UK charity for severe allergy issues, in recognition for his life-long dedication to allergy research.

Whilst not an expert in virology, Frankland was also asked about his thoughts on the ongoing COVID-19 pandemic, which he said was worrying. Frankland himself remembers first-hand the impact of the 1918 flu pandemic. Because of the current situation, he had to celebrate his last birthday under restrictions, but was thankful to the staff at his care home. “The staff at the care home are doing a fantastic job at keeping us residents safe and I’m so grateful to them.”

His life and work is a testament to pushing through even in times of adversity, but also by recognizing we all must work together if we are to succeed together.

He will be greatly missed in the allergy research community and beyond.