A microelectrode array no bigger than a penny gives hope to restoring sight in blind people. 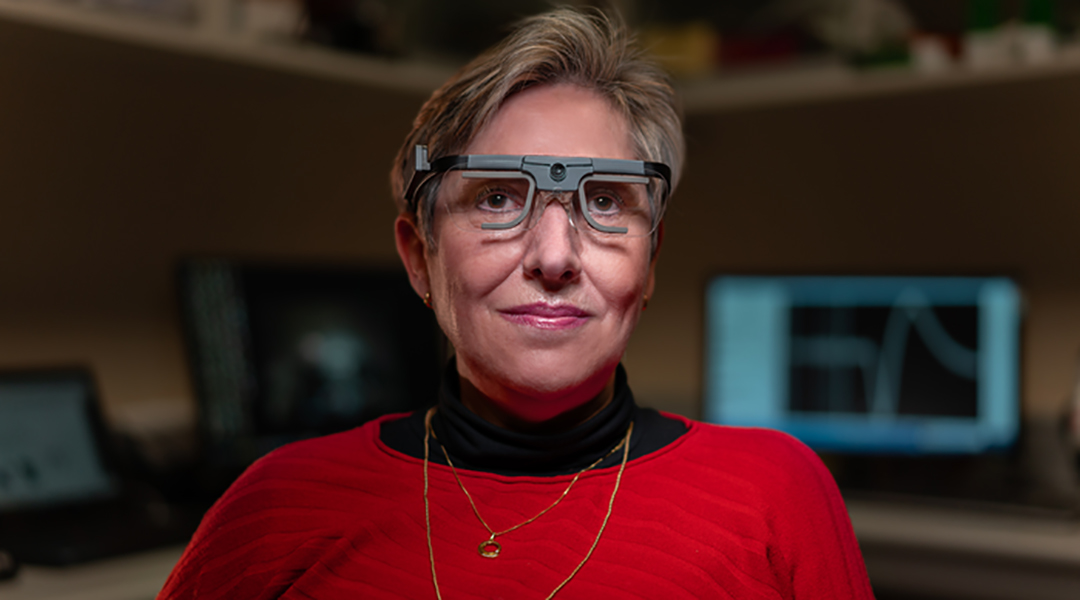 Image credit: John A. Moran Eye Center at the University of Utah

58-year-old Berna Gómez has been totally blind for the past 16 years after developing toxic optic neuropathy, a condition that rapidly destroys the optic nerves connecting the eyes to the brain. Within a matter of days, Gomez says, she completely lost her vision and any perception of light. But in late 2018, a single white line “appeared on the midnight canvas of her mind”, made possible through a newly invented prosthesis that had been hardwired into her brain.

The tiny microelectrode array (no bigger than a penny) invented by Richard Normann from the John A. Moran Eye Center at the University of Utah was implanted into Gómez’s visual cortex with the purpose of stimulating and recording the activity of neurons located there.

“A long-held dream of scientists is to transfer information directly to the visual cortex of blind individuals, thereby restoring a rudimentary form of sight,” wrote the team of researchers led by Normann and collaborator Eduardo Fernández from Spain’s Miguel Hernández University. “However, no clinically available cortical visual prosthesis yet exists.”

This idea of artificially restoring vision through direct electrical stimulation of the visual cortex has been a subject of study since the 1960s. However, in these early experiments, say the researchers, artificial phosphenes or visual perceptions were difficult to define, making shape recognition impossible.

The current study has been 30 years in the making and required painstaking efforts by both Normann and Fernández to get to this point. “When we started this project […], there was nobody doing anything in this field, and we needed so much basic information,” said Normann.

After developing the prosthetic device, called the Utah Electrode Array (UEA), in the 1990s, Normann published over 100 papers, laying the foundations for the development of an effect device that could endow artificial vision.

Through eyeglasses equipped with a miniature video camera, visual data is transferred to the microarray in Gómez’s brain where it stimulates neurons to produce “phosphenes” or tiny white points of light. This is similar to when people “see stars” if certain areas of the brain that process visual information are stimulated by force — after a blow to the head, for example.

“Individuals with profound blindness generally do not live in a world of total blackness but experience a variety of spontaneous phosphenes that should be considered in the development of any visual prosthesis,” wrote the team. “The initial inability of our subject to discriminate spontaneous from evoked phosphenes posed a major impediment to the performance of meaningful stimulation experiments.”

Over two months, Gómez had to learn to distinguish between spontaneous phosphenes and those produced through electrical stimulation. The experiments helped determine the amount of electrical current that could safely be used to produce phosphenes and confirmed the biocompatibility of the prosthesis.

While the primary goal was to evaluate safety, said Fernandez, the team hoped their prosthesis would turn video images into phosphene patterns that Gómez could perceive. After six months of experiments, Gómez finally exclaimed, “I can see something!” The test had been to identify the borders of a line drawn on a poster board in the lab.

Gómez was eventually able to identify other shapes and simple letters. The team also devised a video game to help her practice, in which she navigated a circle through a black and white maze.

Thanks to her contributions, Normann and Fernández made Gómez a co-author on the study. “I know I am blind, that I will always be blind,” she said. “But I felt like I could do something to help people in the future. I still feel that way.”

Though only one implant was used in this study, Normann indicated that between seven to ten devices could be placed in the visual cortex to produce more detailed images in the future.

One goal of this research is to give a blind person more mobility,” said Normann. “It could allow them to identify a person, doorways, or cars easily. It could increase independence and safety. That’s what we’re working toward.”