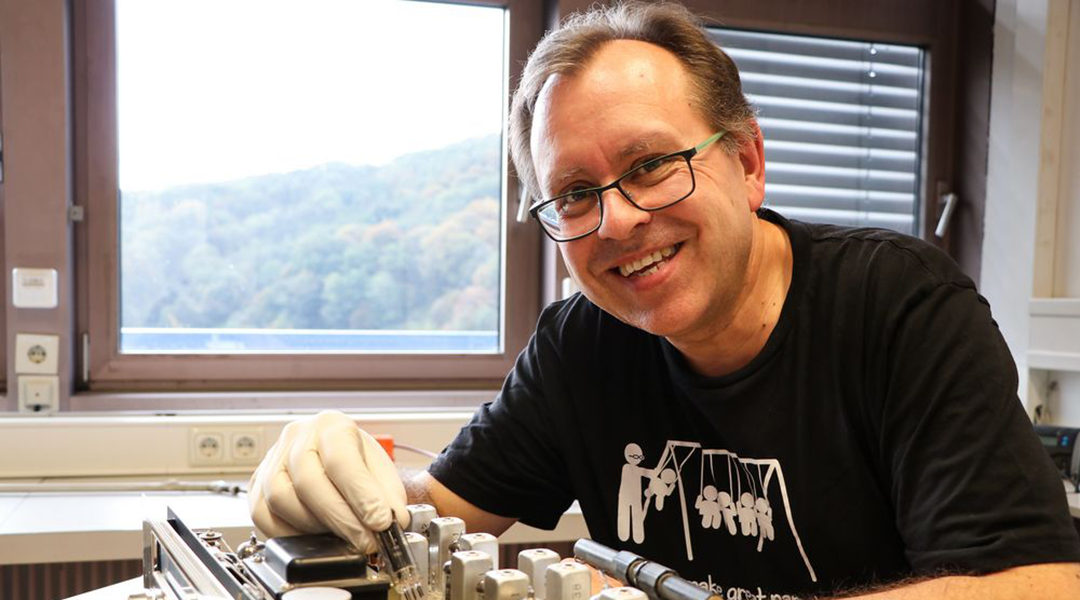 With great sadness we have received the news of Siegfried Bauer’s death.

Shortly after our last meeting at the Materials Research Society in Boston in late 2017, Siegfried informed us of his diagnosis, which came as a shock. We always enjoyed our meetings with him, his critical but constructive advice, and his friendly and warm personality. Those of us who have met Siegfried got to know him as an interesting and entertaining person to talk to, and an excellent scientist who held unconventional views that were sometimes contrary to scientific mainstream beliefs.

Our thoughts are with his family, friends, and colleagues—the Advanced editorial team.

Siegfried Bauer, an internationally renowned, very creative applied physicist, who also was a prolific materials scientist and engineer, died on 30 December 2018 in Linz, Austria, after a one-year battle with cancer. He was full professor of soft-matter physics at the Johannes Kepler University Linz, Austria, and a scientific leader and innovator across the fields, but mainly in the areas of electroactive materials (including electrets) and of stretchable and imperceptible electronics.

Siegfried was born on 15 May 1961 in the small village of Berghausen (Pfinztal) near Karlsruhe. He was the youngest son of a locksmith and a seamstress. His parents were also part-time farmers who owned a small plot of land including a vineyard. In the rural environment of his home village, he quickly developed a very open-minded curiosity about almost everything around him and a deep love of nature. During a long illness in his youth when he had to stay in a hospital bed for several months, he intensely studies mathematics and physics textbooks and subsequently became an excellent student. He was fortunate to find deep inspiration and support from his physics teacher, who further motivated him so that he decided to study physics at the University of Karlsruhe (now Karlsruhe Institute of Technology or KIT) from 1980 until 1986.

At university, Siegfried quickly discovered some of the strange features of a traditional research and teaching institution, and developed a critical attitude and a unique sense of humor toward the academic establishment and its rituals. At the same time, however, he met inspiring teachers and mentors who selflessly supported and guided one of their most gifted students. Wolfgang Ruppel, full professor of applied physics, accepted him as Ph.D. student and encourageed him to pursue his own research direction and to start working on ferroelectric polymers, which were at that time still quite often seen as an oddity or even considered “dirty physics” by the solid-state physics community. Siegfried Bauer kept very fond memories of Wolfgang Ruppel, recently stating he would still “go through thick and thin any day with his Ph.D. advisor”.

In 1990, Siegfried Bauer successfully defended his Ph.D. thesis on ferroelectric polymers with the rare grade summa cum laude. He continued to work as post-doctoral scientist at his alma mater, but also started to teach at the Fachhochschule Karlsruhe and take up research projects at the universities of Karlsruhe, Marburg, and Stuttgart in Southern Germany. His expertise in research and teaching grew quickly, and his seminal work lead to several publications. At this time, he also met his future wife Simona Gogonea who arrived on a German Academic Exchange Service (DAAD) scholarship from Bucharest, Romania. Siegfried and Simona soon married (in 1991) and became very close companions in life and science.

In 1992, he joined the Heinrich Hertz Institute for Telecommunications (HHI) in Berlin-Charlottenburg as a scientist and project manager. Within his team, he initiated and developed several new experimental techniques and achieved a large range of remarkable results that yielded seminal publications, mainly in the area of nonlinear optics and photonics with electrooptical polymers. For some of his excellent papers, Siegfried Bauer received the Prize of the Information Technology Society (ITG) within the German VDE, and the Kurt Ueberreiter Award of the Berlin-Brandenburg Society for Polymer Research (BVP), both in 1994. International collaborations took him to the École Polytechnique in Montréal, Québec, Canada (twice), to the University of Arizona in Tucson, and to the National Institute of Standards and Technology (NIST) in Gaithersburg, Maryland, which lead to several joint publications. When his mentor and life-long friend Reimund Gerhard moved to the University of Potsdam at the end of 1994, Siegfried Bauer became his successor as team leader at the HHI. Later Siegfried followed him to the University of Potsdam in order to prepare for his habilitation, and Simona Bauer-Gogonea, who in 1995 received her Ph.D. from the Technical University (TU) of Berlin, took over as team leader.

Dr. Bauer’s very productive and successful years in Berlin and Potsdam culminated in his habilitation on “Poled polymers for applications in sensorics and photonics”, which he defended in 1996 at the University of Potsdam. In 1997, he received the prestigious Karl Scheel Award of the Physikalische Gesellschaft zu Berlin (PGzB) within the German Physical Society (DPG). After his appointment as lecturer (Privat-Dozent) at the University of Potsdam, he received offers from a number of universities and accepted a position as Associate Professor at the Johannes Kepler University (JKU) in Linz, Austria, where he started in October 1997. In 2002, Siegfried Bauer was appointed full university professor of experimental physics and established the Department of Soft Matter Physics at the university. He soon became one of the most successful, most influential, and most recognized scientific researchers and academic teachers at the JKU Linz.

During more than 20 years in Linz, Siegfried Bauer further developed a unique style of research and teaching together with his team. His approach to science started with open questions and included unconventional or orthogonal “out-of-the-box” ways of thinking in a playful manner. In Siegfried’s view, occasional failure is not only taken into account, but is seen as a necessary condition for eventual success because we learn mainly from mistakes and failures—just like our children and our best students. The essence of Siegfried Bauer’s research and teaching “philosophy” is probably its focus on the human beings who are the actors of the scientific process, who enjoy to play and develop like children, who need (and want) to exchange ideas and to work together, who naturally bring a rich diversity of talents and competences to the process, and who always need to overcome inherent restrictions from traditions, conventions, rulebooks, etc.

Siegfried Bauer’s approach overcomes boundaries between disciplines, between theory and application, between different cultures and countries, between arts and sciences, between philosophy and engineering, and, last, but not least, between seriousness and playfulness. Maybe his style is best characterized with the words of Georg Christoph Lichtenberg, who wrote around 1795: “The science of electricity is, along the common path, now so well trodden and scoured that nothing is to be gained anymore on the highway—one must march cross-country and leap over ditches. This method which one could well call unmethodical is, by the way, to be recommended very much indeed.”[1] Siegfried Bauer himself occasionally referred to Paul Feyerabend, the Austrian/US-American philosopher of science, and his book “Against Method: Outline of an Anarchist Theory of Knowledge” in 1975.[2] Given his unconventional approach, it was probably unavoidable that Siegfried Bauer sometimes caused anger and resistance among his scientific peers, since he questioned beloved certainties and authoritative conventions in a playful manner, and often used Socratic probing in his thinking and teaching. And when he felt that creative, well-founded new approaches were ruled “nonsense”, he stepped in and defended the right to think differently and to err, as there is no absolute truth.

Over the past two decades, the very original and highly creative “Bauer approach” yielded impressive successes and results in research and teaching within the Soft Matter Physics department at the JKU Linz. Only a few particularly noteworthy examples are mentioned in the following:

The unusual approach and the deep insight of Siegfried Bauer and his research team yielded not only many highly cited and internationally recognized publications, but led also to several awards and honors. Here, we only mention the awarding of a rare and prestigious Advanced Investigator Grant by the European Research Council (ERC) for Siegfried Bauer in 2011 and his appointments as fellow by the Institute of Electrical and Electronics Engineers (IEEE) for “contributions to the understanding and application of electroactive polymer dielectrics” and by the Society of Photo-Instrumentation Engineers (SPIE) for “achievements in plastic electronic devices and soft matter physics” in late 2015 and late 2018, respectively.

As documented in his publications, Siegfried Bauer had many professional and personal friends and scientific collaborators all over the world—from Israel to Ireland, Canada to China, and New Zealand to North America. He was an active contributor to several learned societies, to international conferences, and to leading scientific and technical journals, e.g., as associate editor and member of the Editorial Board of Applied Physics A (Springer), Applied Physics Review (AIP), Extreme Mechanics Letters (Elsevier), IEEE Transactions on Dielectrics and Electrical Insulation (IEEE DEIS), and Proceedings of the Royal Society A (The Royal Society); as member or co-chair of conference steering committees for the Conference on Electroactive Polymer Actuators and Devices (SPIE), the International Conference on Electromechanically Active Polymer Transducers and Artificial Muscles (EuroEAP Society), the International Symposium on Electrets (IEEE Dielectrics and Electrical Insulation Society), Symposia of the Materials Research Society (MRS), etc. In addition, Siegfried was in high demand as an experienced, polite, and careful reviewer for several international journals and high-level funding agencies.

The international scientific community and the Johannes Kepler University Linz have lost an unusual and unusually successful researcher and teacher, a beautiful mind, a very special person, and last, but not least, a very good friend. Siegfried Bauer was a man full of curiosity with a unique view on the wide world and on his environment, and always keen to learn from every experience and even from his failures. He was a person who trusted his friends and colleagues as well as his own abilities, but who also knew his limitations. Equipped with a skeptical, questioning attitude toward so-called authorities and established knowledge, Siegfried Bauer also had a great sense of humor that was sometimes very special, but never offensive. He was someone who enjoyed lateral thinking and finding unusual, but convincing solutions to any problem that interested him, with many scientific and non-scientific problems that attracted Siegfried’s searching mind.

Siegfried is survived by his wife Simona, his daughter Lara, his son Lukas, his mother, and two of his brothers. His family, his friends, and colleagues all over the world, his university, his former and present students, and others who knew him will tremendously miss Siegfried Bauer, but will always remember him as a very special person, full of humor and empathy, and as an inspiring and supporting companion and guide. His memory, his philosophy, and his work will remain alive in and through all who met him.

This was originally published as a press release.