Inspired by microscopic hairs on gecko feet, scientists in South Korea have developed a shape-memory polymer that acts as a dry adhesive. 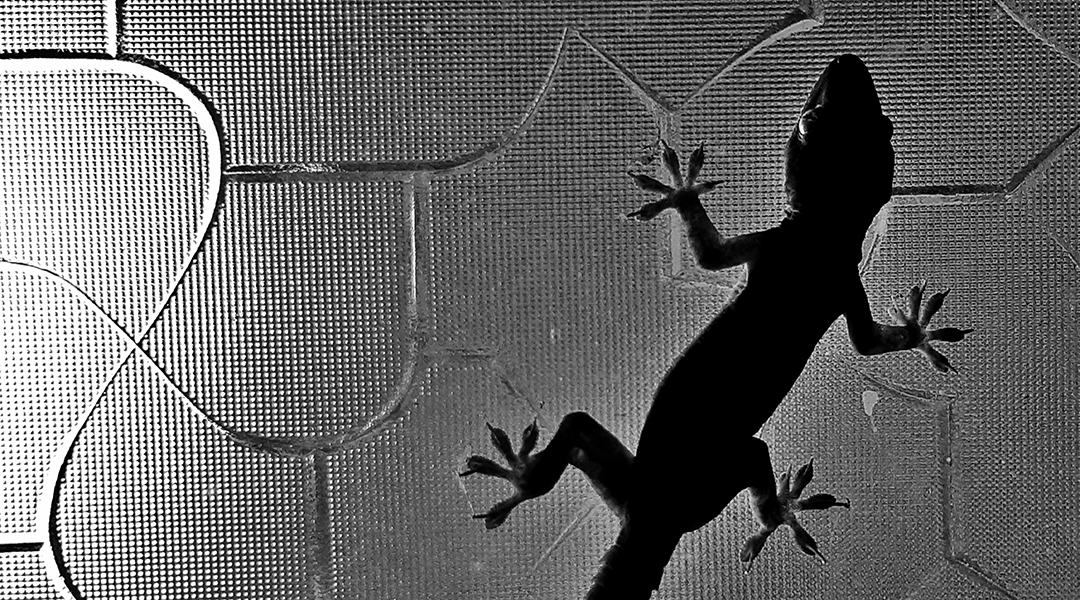 Materials inspired by nature have a long history. Just last year, researchers developed an underwater glue inspired by barnacles. Now, scientists have turned to geckos — specifically their feet — for inspiration for new dry adhesives based on shape-memory polymers. Shape-memory polymers (SMPs) are polymers which can return to their original form or shape when exposed to external stimuli, be that light, temperature, or pressure.

The undersides of gecko feet have microscopic, hair-like structures known as “setae”, whose shape allows them to walk and stay put on flat, vertical surfaces, including ceilings. Setae are, however, not “sticky” but instead use van der Waals forces, allowing geckos to take their feet off surfaces as easily as they can step on them. This is also due to the directional growth of these setae, endowing their feet with a switchable adhesive capability.

The gecko foot consists of numerous setae of various lengths (30–130 µm), and a diameter of 5–10 µm. At the end of the hair, a spatula-like structure branches out from a stalk and has a length of 2–5 µm and a diameter of 100–200 nm. This is the key to their high adhesion, but despite this, the gecko can climb walls with high speed due to the fast switching between attachment and detachment, which occurs within a few milliseconds.

The “spatula” adheres to a surface for attachment, in which its angle is decreased under a critical point of 30°, generating van der Waals interactions with the surface. To detach from the surface, the angle increases over the critical point. This principle facilitates the gecko’s fast locomotion while walking on diverse surfaces, endowing it with gravity-defying movement.

Kwak and his team have cleverly applied this principle to their SMP-based adhesive and successfully showed high, detachable adhesion to various surfaces due to the SMP surface being able to recover its original shape (highlighted in the figure below).

The researchers also tested their adhesive against another based on polydimethylsiloxane (PDMS), and found their switchable dry adhesive showed superior capabilities. The PDMS dry adhesive failed to lift samples of metal, nanograting, glass, and wood, as opposed to the researchers’ gecko-feet inspired adhesive, which successfully lifted all four. Durability was also tested, showing continued adhesive properties after 500 tests.

The authors hope this dry adhesive can see applications in digital display technologies. As the glass used in semiconductors or displays becomes thinner, the demand for a versatile “pick-and-place” system to manufacture the displays is growing. Perhaps such technologies can be adopted in the near-future, and have the feet of a gecko and Kwak and his team to thank.