A powerful underwater glue inspired by barnacles and mussels 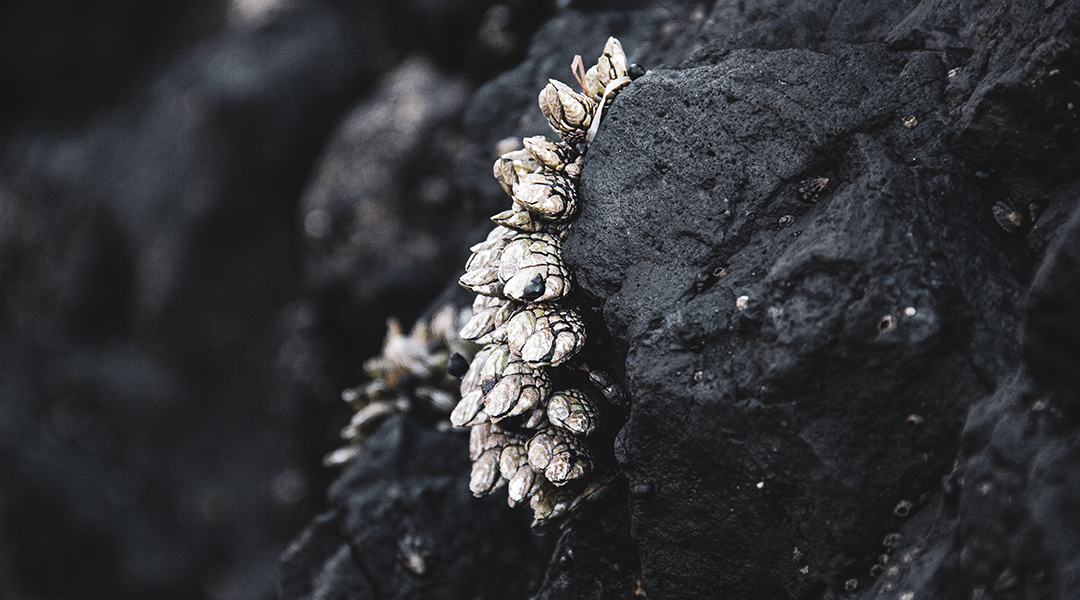 It comes as no surprise, but we have a lot to learn from nature, especially when it comes to making powerful, water-proof adhesives — ever tried to chip a mussel off a seawall or a barnacle off the bottom of a boat? Maybe not, but it is said to be quite difficult.

Engineers at Tufts University have taken note, and using our stubbornly adherent crustacean friends as inspiration, have created a new type of glue that outperforms even the strongest dry adhesives. The Silklab “glue crew”, as they call themselves, used a fibrous silk protein harvested from silkworms, and with it were able to replicate key elements of barnacle and mussel glue, including protein filaments, chemical crosslinking, and iron bonding.

“The composite we created works not only better underwater than most adhesives available today, it achieves that strength with much smaller quantities of material,” said Fiorenzo Omenetto, professor of engineering at Tufts School of Engineering and director of the Tufts Silklab where the material was created.

“And because the material is made from extracted biological sources, and the chemistries are benign — drawn from nature and largely avoiding synthetic steps or the use of volatile solvents — it could have advantages in manufacturing as well.”

Mussels secrete long, sticky filaments called byssus, which form polymers that embed into surfaces, and chemically cross-link to strengthen the bond. The protein polymers are made up of long chains of amino acids including one, dihydroxyphenylalanine (DOPA), a catechol-bearing amino acid that can cross-link with the other chains. The mussels add another special ingredient — iron complexes — that reinforce the cohesive strength of the byssus.

Barnacles, on the other hand, secrete a strong cement made of proteins that form into polymers which anchor onto surfaces. These proteins fold their amino acid chains into beta sheets — a zig-zag arrangement that presents flat surfaces and plenty of opportunities to form strong hydrogen bonds to the next protein in the polymer, or to the surface to which the polymer filament is attaching.

Inspired by all of these molecular bonding tricks, Omenetto’s team set to work replicating them, drawing on their expertise with the chemistry of silk fibroin protein, which shares many of the same shape and bonding characteristics of the barnacle cement proteins, including the ability to assemble large beta sheet surfaces.

The researchers added polydopamine — a random polymer of dopamine which presents cross-linking catechols along its length, much like the mussels use to cross-link their bonding filaments. Finally, the adhesion strength was significantly enhanced by curing the adhesive with iron chloride, which secures bonds across the catechols, just like they do in natural mussel adhesives.

“The combination of silk fibroin, polydopamine, and iron brings together the same hierarchy of bonding and cross-linking that makes these barnacle and mussel adhesives so strong,” said Marco Lo Presti, post-doctoral scholar in Omenetto’s lab and first author of the study. “We ended up with an adhesive that even looks like its natural counterpart under the microscope.”

Getting the right blend of silk fibroin, polydopamine, and acidic conditions of curing with iron ions was critical to enabling the adhesive to set and work underwater, reaching strengths of 2.4 MPa (megapascals; about 350 pounds per square inch) when resisting shear forces. That’s better than most existing experimental and commercial adhesives, and only slightly lower than the strongest underwater adhesive at 2.8 MPa. Yet this adhesive has the added advantage of being non-toxic, composed of all-natural materials, and requires only 1-2 mgs per square inch to achieve that bond — that’s just a few drops.

“The combination of likely safety, conservative use of material, and superior strength suggests potential utility for many industrial and marine applications and could even be suitable for consumer-oriented such as model building and household use,” said Professor Gianluca Farinola, a collaborator on the study from the University of Bari Aldo Moro.

“The fact that we have already used silk fibroin as a biocompatible material for medical use is leading us to explore those applications as well,” added Omenetto.