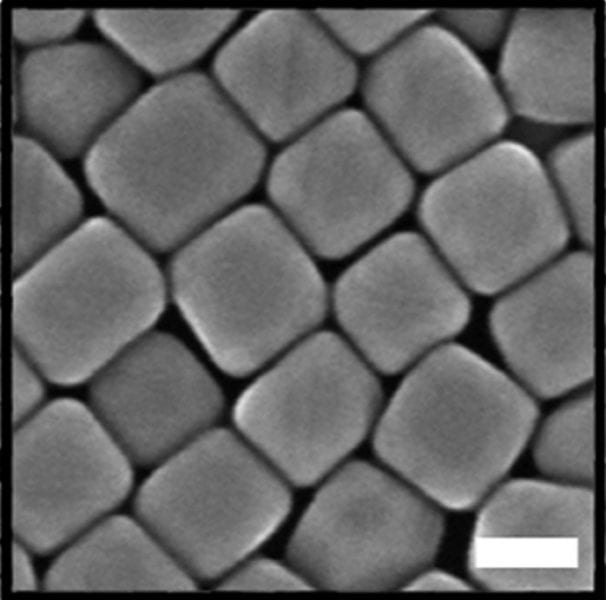 Methods which allow predictable and reproducible control over the shape and defect structures of nanoparticles are a sought-after ideal in research on nanoparticle synthesis. Realising this ideal for silver nanoparticles is one step closer with the discovery that the localised surface plasmon resonance feature observed for nanoscale metals – the collective oscillation of their electrons caused by incident light – can be used to predictably direct the growth of silver nanocrystals.

Such plasmon-mediated growth allows control over the size and shape of the crystals by controlling the wavelength of light incident on the sample. The underlying mechanism is based on silver redox chemistry: excitation of the plasmon in an aqueous citrate solution catalyses the reduction of silver ions, the speed of which influences the dominant facets (and hence the shape) of the growing crystals. In this way, longer excitation wavelengths can be applied to produce longer edge lengths. The corresponding oxidation of seed particles causes their dissolution, increasing the bulk concentration of silver ions.

Mirkin and co-workers have refined this technique to generate twinned silver nanocrystals by controlling the defects within the crystal structure. They discovered that irradiation at higher energies increases the number of twin boundaries during growth. By adjusting the wavelength from 400 to 500 nm, bipyramids or cubes with different types of twin boundaries could be selectively produced.

This plasmon-mediated shape control could also be extended to longer wavelengths, which were tuned to produce silver nanorods with controllable aspect ratios.

The challenge is now to develop this method for other nanoscale species with plasmon resonances.