Swimming cellbots capable of autonomous motion and drug encapsulation can deliver their payload at desired sites. 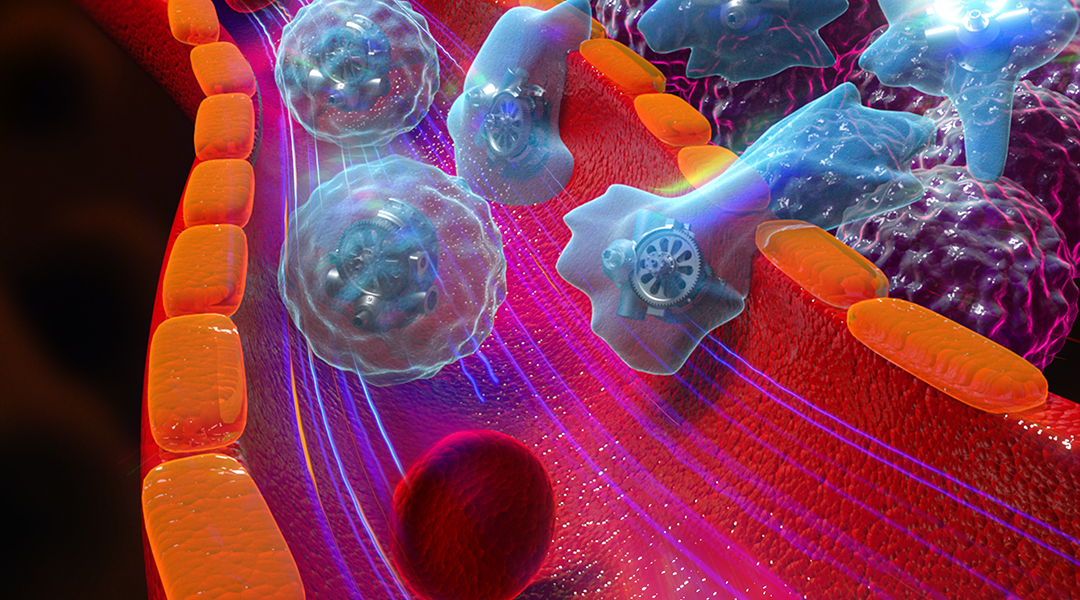 Cellbots take the concept of nanobots to a higher level. Whilst nanobots are gaining traction in the medical research, with one recent study utilizing them for a potential post-root canal treatment, these microscopic machines don’t come without their drawbacks.

Nanobots are after all synthetic, and like all synthetic materials, our body’s natural immune response is to eject them if they enter our bloodstream. They can also be “clogged up” by biological macromolecules, thus hindering their performance.

To address these issues, scientists have turned to cell-based robots, or “cellbots”, as a means of achieving greater compatability within the body. Just like nanobots, cellbots need to move around, and one effective method within the body is by swimming. Swimming cellbots use living cells such as sperm, bacteria, and algae as their foundation, from which they obtain their ability to swim, and these cells can then be functionalized for specific medicinal or therapeutic purposes.

As the field of nanomedicine continues to grow, it is imperative to take a look at its development in recent years and where it may be going in the near future. Qiang He and co-workers at the Harbin Institute of Technology have taken up this task in a perspective recently published Perspective in Advanced NanoBiomed Research.

One of the first examples of a cellbot was developed almost a decade ago, and used bovine sperm cells encapsulated in magnetic microtubes. But since then, other such cells have been used, such as leukocytes—a type of immune cell that can “chase” and kill invasive bacteria. He and his team point out how such immune cells are ideal candidates for cellbots since—being responsible for defending us against pathogens—they naturally have the ability to target, detect, and interact with other cells. This has clear advantages if leukocytes are loaded with anti-cancer drugs, for example, and are tweaked so as to be able to specifically target cancer cells within the body.

A subgroup of leukocytes are the neutrophils, and correspondingly, a subgroup of nanobots is known as “neutrobots”. Neutrobots have two predominant driving modes: movement by a rotating magnetic field, or by chemical stimuli, known as “chemotactic” locomotion.

Chemotactics is particularly useful because nano- or cellbots with such capabilities can cross the blood–brain barrier (BBB). In a paper published just last year in Science Robotics, He and colleagues demonstrated the use of “dual-responsive” cellbots that could cross the BBB in order to target brain tumors in mice. They were dual-responsive because they were first controlled by an external magnetic field to reach the brain, and then the magnetic field was turned off, allowing chemical stimuli of the blood vessel cell walls to take over, and allow the cellbots to cross over into the brain.

The delivery efficiency of these drug-loaded neutrobots can reach about 10% which is significantly higher than that of traditional nanocarriers. Such swimming cellbots may load different types of drugs and can be navigated through the combination of natural chemotaxis and externally physical fields such as magnetic, optical, and ultrasonic fields which may have potential in biomedical fields.

The future of cellbot medicine

The authors point out that despite these impressive advances, cellbots are some way off until we will see them being used in real-life clinical settings. Indeed, further development is needed to optimize and scale the production of cellbots, as well as overcoming issues such as drug delivery efficiency and the body’s immune response. Despite their advantage over synthetic nanobots, cellbots can nevertheless fall victim to the body’s immune system.

Nevertheless the authors, and the community at large, remain optimistic that these challenges can be overcome. Despite their size, the future of cellbots looks to be quite big.