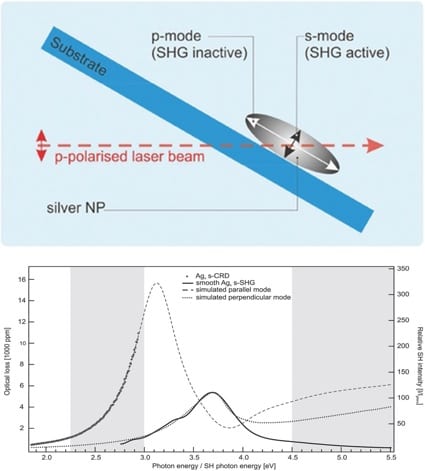 By Dongsheng He, Jie Zeng, Hefei National Laboratory for Physical Sciences at the Microscale (HFNL), University of Science and Technology of China

A wide range of potential applications urges deep insight of the optical properties of  “coinage” metals on a surface. At small particle sizes (e.g. less than 2 nm for silver), detecting resolvable signals from well-separated nanoparticles is extremely difficult for conventional surface spectroscopic tools. Alternative methods should be sought.

Recently, Dr. Martin Thämer and Dr. Aras Kartouzian, together with colleagues from Prof. Ulrich Heiz’s group at the Technical University of Munich, chose to take on this challenge. Employing nonlinear second harmonic generation (s-SHG) spectroscopy, combined with linear surface cavity ring-down (s-CRD) spectroscopy, they shed light on silver clusters as small as tens of atoms. In this experiment, s-SHG provides the insight of second harmonic oscillation induced by asymmetric potential, whereas s-CRD is used to examine optical loss of the fundamental photon energy. The emerged experimental spectra indicates plasmon splitting and a blue shift in the s-SHG spectrum deviating from Mie’s theory simulation of a spheroid of silver clusters in an isotropic media. The authors attribute this to the anisotropy of both dielectric coefficient and the cluster shape on the surface. The revised simulation, which is also from Mie’s theory but includes the geometric parameters of the cluster and surrounding media, is remarkably consistent with the obtained experiment data. The flatness, i.e. the shape, of the cluster on the surface, consistent with previously reported studies, plays a vital role in the optical property of such small clusters.

Demonstration of this method has several important implications. Firstly, it provides a practical approach to study the optical properties and the morphology of ultrasmall clusters on a surface. Secondly, it shows that Mie’s theory is still applicable to such small clusters and experimentally confirms that the transition size from plasmonic to molecular optical properties of supported silver clusters lies at less than 40 atoms, where the exact size probably needs further investigations. However, there is no doubt this work paves the way for studying the optical properties of even smaller clusters on a surface, size by size, or probably even atom by atom. We are very much looking forward to further progress on this project!