A group working on photodetectors has covered monolayer graphene with a thin layer of perovskite islands, leading to ultrahigh responsivity. 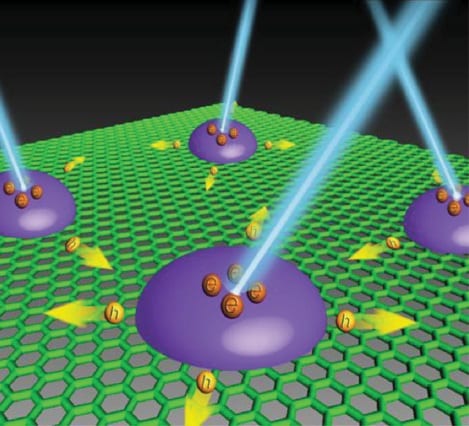 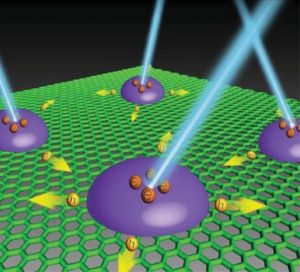 Graphene’s broadband light absorption makes it a promising material for optoelectronic applications. It also has a fast response time, but its fast recombination rate and lack of a gain mechanism mean that its application as a pure material in this area looks unlikely.

The generation of hybrids with complementary materials should resolve the problem and provide improved performance, as pursued by a group working between China and Australia. They covered monolayer graphene with a thin layer of dispersive organolead halide perovskite islands, as illustrated on the front cover of the October issue of Advanced Optical Materials.

Perovskite is a hot research material for myriad optics applications due to its impressive light-harvesting ability, large absorption cross-section and long diffusion length, however, its performance thus far has also been limited when used as a pure material.

While previously reported graphene–perovskite hybrids have shown promise, their properties such as photoconductive gain have not yet reached the standards set by alternative materials, thought to be down to the high bulk recombination rate of photoexcited carriers within the bulk perovskite thin film.

The key difference in this new hybrid photodetector is its use of perovskite islands instead of a bulk thin film. The islands, with sizes up to micrometers, display a lower bulk recombination rate of photogenerated carriers, leading to a photoconductive gain of about 109 electrons per photon and a responsivity of about 6.0×105 A W-1. This compares rather well to the bulk thin films, which produced a responsivity of only about 180 A W-1.

Optical microscopy and photocurrent mapping provide real-space evidence for charge transfer and photogating effects, and the device shows a broad photodetection spectral range from the UV through visible range of the spectrum (250–700 nm), suggesting opportunities for this device in scalable UV photodetectors and imaging sensors.