The patterning power of azopolymers in photonics

Researchers at Aalto University examine the versatility of surface patterns in azopolymers for applications in photonics. 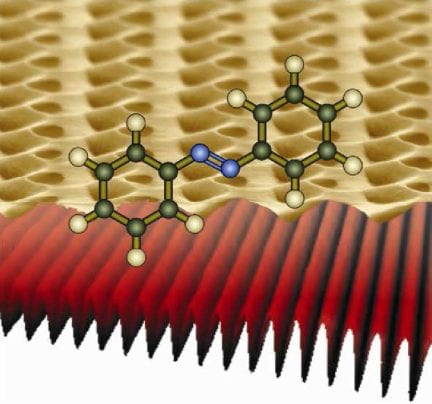 By virtue of their photochemical isomerization between trans- and cis-forms, azobenzene-containing polymers (azopolymers) have proven to be ideal for creating a vast array of photonics elements. In their recent review in the Journal of Polymer Science: Polymer Physics, Arri Priimagi and Andriy Shevchenko at Aalto University in Finland discuss the use of azopolymer surface patterns for applications in photonics. Their focus is two-fold: the patterns can be used either directly as functional optical elements or indirectly to microstructure or nanostructure other optical materials.

When an optical interference pattern shines on an azopolymer film, the polymers reorient themselves and an exact replica of the pattern forms on the film, known as a surface-relief grating (SRG). Understanding the principles behind this light-induced mass transport, as Priimagi and Shevchenko explain, is essential for the efficient use of azopolymers in photonics applications.

Diffraction gratings can be easily created with azopolymers. As a fascinating example of the versatility of SRGs, gratings with curved fringe patterns have recently been explored. Another application resulting from this light-modification is near-field optics imaging, allowing for the mapping of optical fields near probe tips and metal nanostructures.

Once the azopolymer films have been patterned, they can then be used as templates to create patterns in other materials. Compared to traditional photoresist-based or electron beam lithographic techniques, patterns created via azopolymers have obvious benefits. They can be achieved on large surface areas, the technique is insensitive to ambient light, and the patterns can be easily reconfigured or erased. Azopolymers have been used as molding templates, as masks for etching, and recently, for a technique known as “directional photofluidization lithography.” In this method, azopolymer movement is dictated by the polarization direction of the incident light.

Optical applications of azopolymers have already been demonstrated in diffraction gratings, microlens arrays, spectral filters, and distributed Bragg reflectors, to name only a few. Priimagi and Shevchenko anticipate that future research will extend to patterning on curved surfaces, three-dimensional photonic crystals, fiber-optical Bragg reflectors and lasers, and a variety of nanostructured plasmonic elements. A new avenue of research combining the optical patterning of azopolymers and the controlled assembly of block copolymers, they believe, holds great potential in microfabrication and nanofabrication.