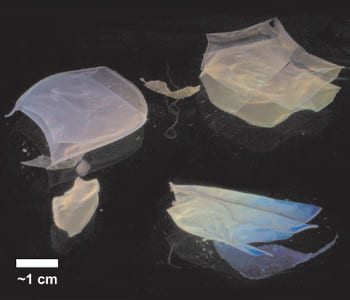 A collaboration of US researchers has developed temperature-sentitive hydrogel-particle films with adjustable size, shape, porosity and optical transmission. A simple evaporation method for fabrication is demonstrated, and membrane parameters can be readily tuned with temperature control.

Left to dry, a drop of colloidal particle suspension will typically leave a non-uniform, ring-shaped residue. This so-called “coffee-ring” effect is avoided by using poly(N-isopropyl acrylamide) (PNIPAM) microgel particles of a few microns in diameter with a suspension containing comonomer 2-aminoethylmethacrylate (AMEA). The AMEA introduces amine groups onto the particle surfaces, which are used for subsequent cross-linking.

Aqueous suspensions of the PNIPAM particles and glutaraldehyde cross-linker are dropped onto silicon wafer substrates. The immobile droplets are then evaporated in ambient conditions. A robust film is formed as the particles spread over the air–water interface, and neighbouring amine groups on the PNIPAM particles cross-link with the glutaraldehyde. The cross-linked films are detached from the substrate by soaking in a water bath, as illustrated in the figure below. The films pictured were made from droplets comprising 200–300 μL of suspension. 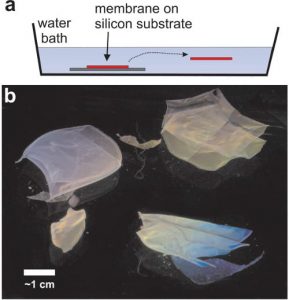 a) Illustration showing the immersion of the film–substrate in a water bath, and subsequent release of the film into the water. b) Floating PNIPAM films viewed from the side present colorful interference patterns.

These novel films not only benefit from a simple fabrication procedure; due to the temperature sensitivity of PNIPAM particles, the films exhibit temperature-responsive behavior. T. Still and co-workers characterize this behavior with a series of heating and cooling experiments. They present interesting findings concerning the film optical properties. Modifying the temperature changes the polymer density, which in turn alters the particle refractive index and size.

The authors consider the potential to control film porosity and permeability for future applications. Furthermore, their method can be suitably used with hydrogel particles that range in size from tens of nanometers to micrometers, greatly increasing the range of responsive films that may be produced and tailored to specific applications. Read the full paper online at Advanced Materials Interfaces, which has free opt-in access for institutions until the end of 2015.