Superior properties but prone to corrosion 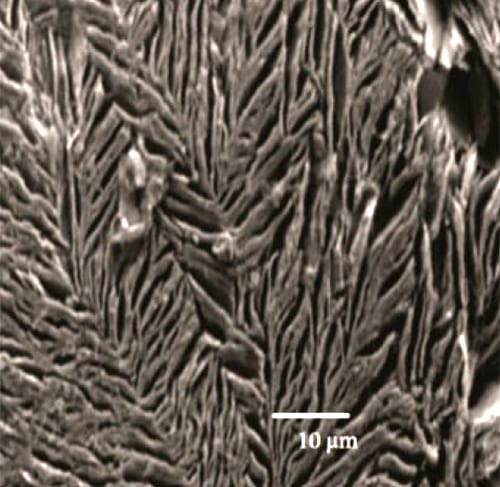 The mechanical properties of iron and its alloys depend on several factors like crystal structure or carbon content. Bainite for instance is iron that shows an acicular microstructure. Attractive mechanical properties of bainitic steels including a uniquely high combination of strength, toughness, and ductility, makes them a potential candidate for impact and wear resistance applications in the automobile, building, offshore and defense industries.

Generally, grain refinement has been shown to improve the mechanical properties of metals, and this has also been achieved for the high alloyed bainitic steels. The resultant structure is an interlace of retained austenite and bainitic ferrite laths. Austenite is non-magnetic allotrope of iron. The fine structure and high volume fraction of stable retained austenite obtains superior mechanical properties.

They analyzed the microstructures of the steel after two different heat treatments using transmission electron microscopy along with X-ray diffraction technique. The results clearly show that nanostructured bainite formed at the lower temperature was marginally more resistance to corrosion as compared with the bainitic structure formed at the higher temperature. The Australian scientists found that the lathe thickness of the nanostructured bainitic steels take the key role for corrosion attack.