New liquid crystal ensemble resembles a compound eye and can be used as a lens. 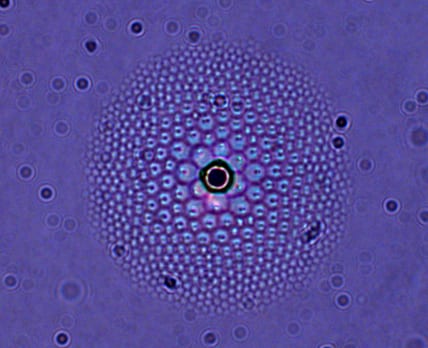 A liquid crystal “flower” under magnification. The black dot at center is the silica bead that generates the flower’s pattern.

A team of material scientists, chemical engineers and physicists from the University of Pennsylvania has made another advance in their effort to use liquid crystals as a medium for assembling structures.

In their earlier studies, the team produced patterns of “defects,” useful disruptions in the repeating patterns found in liquid crystals, in nanoscale grids and rings. The new study adds a more complex pattern out of an even simpler template: a three-dimensional array in the shape of a flower.

And because the petals of this “flower” are made of transparent liquid crystal and radiate out in a circle from a central point, the ensemble resembles a compound eye and can thus be used as a lens.

The researchers’ ongoing work with liquid crystals is an example of a growing field of nanotechnology known as “directed assembly,” in which scientists and engineers aim to manufacture structures on the smallest scales without having to individually manipulate each component. Rather, they set out precisely defined starting conditions and let the physics and chemistry that govern those components do the rest.

The starting conditions in the researchers previous experiments were templates consisting of tiny posts. In one of their studies, they showed that changing the size, shape or spacing of these posts would result in corresponding changes in the patterns of defects on the surface of the liquid crystal resting on top of them. In another experiment, they showed they could make a “hula hoop” of defects around individual posts, which would then act as a second template for a ring of defects at the surface.

In their latest work, the researchers used a much simpler cue.

“Before we were growing these liquid crystals on something like a trellis, a template with precisely ordered features,” Kamien said. “Here, we’re just planting a seed.”

The seed, in this case, were silica beads — essentially, polished grains of sand. Planted at the top of a pool of liquid crystal flower-like patterns of defects grow around each bead.

In their experiment that generated grid patterns of defects, those patterns stemmed from cues generated by the templates’ microposts. Domains of elastic energy originated on the flat tops and edges of these posts and travelled up the liquid crystal’s layers, culminating in defects. Using a bead instead of a post, as the researchers did in their latest experiment, makes it so that the interface is no longer flat.

“Not only is the interface at an angle, it’s an angle that keeps changing,” Kamien said. “The way the liquid crystal responds to that is that it makes these petal-like shapes at smaller and smaller sizes, trying to match the angle of the bead until everything is flat.”

Surface tension on the bead also makes it so these petals are arranged in a tiered, convex fashion. And because the liquid crystal is transparent, the entire assembly can function as a lens, focusing light to a point underneath the bead.

“It’s like an insect’s compound eye, or the mirrors on the biggest telescopes,” said Kamien. “As we learn more about these systems, we’re going to be able to make these kinds of lenses to order and use them to direct light.”

This type of directed assembly could be useful in making optical switches and in other applications.

Mystery solved: The origin of the colors in the first color photographs
Taking the sting out of dental procedures with microneedles
Methods Perspectives: Assessing Battery Interfaces via NMR
Microrobots against harmful polymers in water bodies