Solid-state and calcium-ion technologies, new SEI concepts, and intercalation electrodes are at the top of the list for the latest advanced battery research.

In April last year, I took a look at some of the latest lithium battery research being published across the Advanced journal family. A little over a year later, research on battery technologies looks set to keep expanding, with many potential alternatives to lithium systems also under active investigation. It seems a good time to share some of the most recent work on these systems… But first, a quick picture of the motivation behind this massive, international effort:

Global energy requirements are rising rapidly. Every time you pull out your smartphone, whether it be to check the weather for your crops, to get an update on the bus schedule, or just to find out which celebrity was the most drunk last night, you’re contributing to that energy use. It’s generally agreed that staying connected is important, but the demand for certain raw materials is becoming unsustainable, particularly as changes in policy and in the way we use technology drive the shift from fossil fuels toward cleaner-running electrochemical systems. Current commercial battery technologies just don’t have the energy density – the energy produced per gram of material used – to keep up.

To solve the key problems of sustainable energy generation and storage (such as the very basic ones outlined in this TEDtalk), researchers are exploring new materials to be adopted as electrodes and electrolytes, as well as creating new functionalities such as flexibility or transparency for wearable or foldable devices.

The desire for higher energy and power densities has led to the investigation of solid electrolytes, which could help to get more out of the standard, high-capacity lithium technologies. Three types of solid electrolytes are currently being explored: polymers, sulfides, and oxides. Polymers are the easiest to work with, but have lower mechanical strength and ionic conductivity than sulfides and oxides. Solid electrolytes need to be processed into very thin films to maximize the current during charge/discharge, but it has proven tricky to achieve precise control during fabrication. 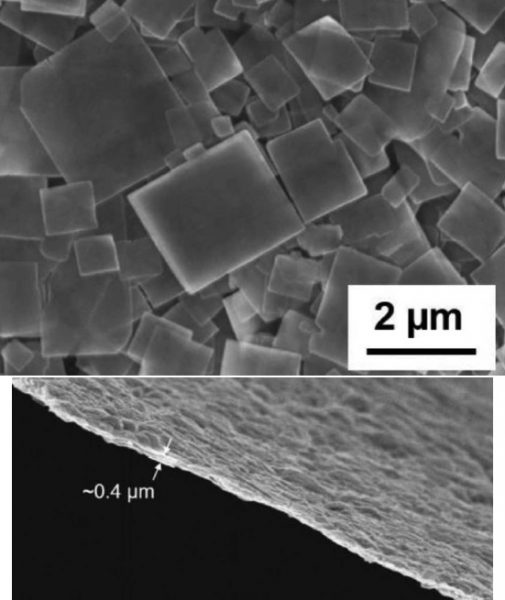 This solid electrolyte is just o.4 micrometres thick, formed from a fused film of nanoplates.

A team working across several different US institutes has created solid electrolyte membranes of β-Li3PS4 with a thickness of just 0.4 µm. These membranes are electrochemically compatible with metallic lithium anodes and don’t require the high processing temperatures typical of sulfide-based solid electrolytes. Their three-step method, highlighted on the cover of Advanced Energy Materials, involves the evaporation-induced, face-to-face stacked assembly of Li3PS4·2ACN (acetonitrile) nanoplates on a nickel substrate, producing a uniform film. Heating to over 180 °C removes the ACN, providing good ionic conductivity and converting the film to β-Li3PS4; applying 200 MPa then causes the films to fuse, increasing their density. The concentration of the precursors was found to govern the film thickness, providing an easy, solution-processable route to greater control over solid sulfide electrolyte membrane formation.

Tackling instead the problem of lithium dendrite formation (an explanation of this problem is provided here by Tsinghua’s Qiang Zhang), a group from China has devised what they call ‘zipper-like’ SEI films. Instead of suppressing stress-induced defects in the SEI layer – as most current methods attempt to do – these films are able to automatically repair cracks using a self-healing mechanism. In Advanced Energy Materials, the research team explains how they patterned the surface of the anode with ordered pits, leading to the formation of net-like SEI films, which reduced the polarization. This allowed the lithium ion flux to be more homogeneous and enhanced the performance during plating/stripping cycles.

The natural abundance of calcium attracted another group from China to look into rechargeable calcium-ion battery systems. Of the multivalent cations being explored, the reduction potential of calcium is the closest to that of lithium, and it displays a higher safety and fast electrochemical kinetics; however, calcium systems suffer very poor stability (surviving less than 50 cycles) and a low working voltage due to the sluggish diffusion of calcium from the standard organic electrolytes into the active materials.

Calcium ions are an interesting alternative to lithium ions, and this system is the most stable yet.

Using expanded graphite electrodes – a material which allows the intercalation of Ca2+ ions rather than just plating and stripping from a metallic calcium electrode – they developed a system with a carbonate electrolyte and Ca(PF6)2. Their open access paper in Advanced Science tells how they achieved a specific capacity of 66 mAh g−1 at a current rate of 2C, with a high working voltage of 4.6 V. Critically, the discharge capacity of their calcium-ion battery remained at 62 mAh g−1 after 300 cycles (a retention of 94% at that point) – the most impressive stability so far for calcium systems.

The use of graphite as an intercalation electrode was also investigated by a team collaborating between Germany and Switzerland. They explored the mechanism of its use in sodium-ion battery systems, in particular, how it maintains such good stability despite the electrode material ‘breathing’ during cycling, and despite it apparently not forming any SEI layer – usually considered necessary to prevent continuous decomposition, but confirmed absent in this study. In their Advanced Energy Materials paper they clarify that, even with the electrode volume expanding and contracting by around 70–100%, it remains stable because graphite particles exfoliate from the surface to form crystalline platelets, but do not delaminate, avoiding the degradation normally observed with such large volume changes.

Graphite intercalation electrodes allow sodium complexes (a) to intercalate between layers (b), and seem stable even without any SEI.

As always, we’ve a way to go before commercializing some of these technologies, but I look forward to watching the step by step improvements in cleaner energy generation and storage. Having more powerful, longer-lasting batteries will mean that future generations can use increasingly powerful portable electronic systems in a sustainable manner. And what about those extra functionalities – interested in a smartphone that folds up into your wallet? Even that is not as far off as you’d think.

Have you already discovered the Excellence in Energy series? This virtual issue of invited-only contributions from top energy researchers contains quite a few reviews of recent battery research, such as this one on sodium-ion batteries. Everything is free to read for a limited time.