Safer technologies with higher energy densities and longer working lives are at the top of the list for lithium battery research. 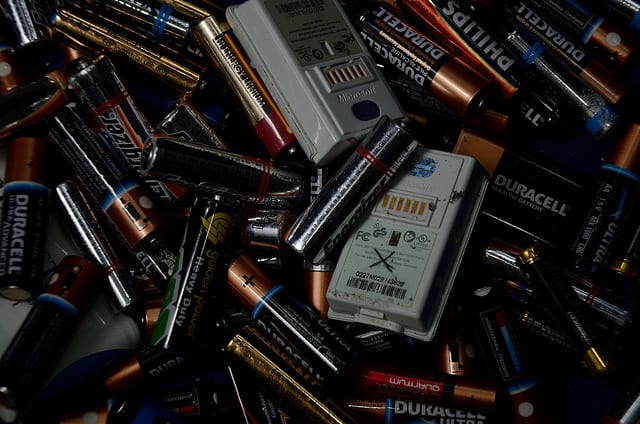 There are two lithium ion batteries on the desk in front of me. You’re probably using one to read this. Most of us carry at least one in our pockets, a couple in our bags, maybe one in the car…

In order to meet a constantly increasing demand for energy in a sustainable way, we need battery technologies with higher energy densities, able to deliver more energy per gram of material used. Research is not limited to lithium ion batteries: the list of battery types is far too long to include here, not to mention the new materials and material combinations being investigated for use as electrodes and electrolytes, and for newer functionalities such as flexibility or transparency. 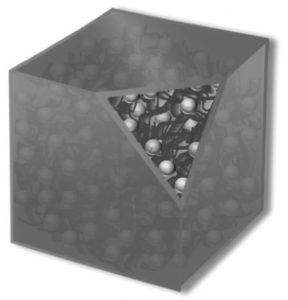 The search for new materials has led a group at Peking University, China, to discover an unusual cathode structure capable of trapping lithium polysulfides both chemically and physically; a useful trick for lithium sulfur batteries. Sulfur is an insulating material, meaning that conductive additives are required to keep things moving in lithium sulfur batteries. This reduces the mass fraction of sulfur and, therefore, the overall energy density. Polysulfides can also break down, leading to fast capacity fading and a reduction in the specific capacity of the battery. 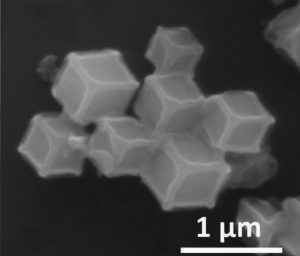 These new structures, described in Small, are hollow carbon boxes filled with manganese oxide nanosheets, applied as the cathode material in a lithium sulfur battery. The polar nanosheets form strong, reversible bonds with the lithium sulfides, helping to hold them inside the carbon nanobox structures to reduce the loss of active material. Confinement of the sulfides in these ‘internal volumes’ also avoids the volume expansion problems known to plague electrochemical devices during cycling.

Another group working primarily at the Harbin Institute of Technology, China, with connections to Curtin University in Perth, Australia, and the University of Surrey, UK, have developed a way to engineer very high surface-to-volume ratio, porous Co3V2O8 nanosheets.

When applied as electrodes in a lithium ion battery, these sheets show the typical initial capacity fade and then an unprecedented slow capacity increase. This increase continues even after 750 charge/discharge cycles, with the electrodes showing an incredible capacity of 2190 mAh/g at 1000 mA/g. 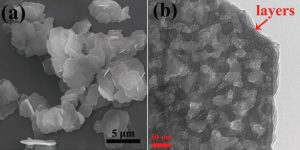 Large volume changes during cycling typically weaken bulk electrode materials and disrupt electronic transport, leading to capacity fading after only a short battery life. In their Advanced Materials Interfaces paper, these researchers show how their dehydration technique introduces a three-stage electrochemical reconstruction mechanism which is able to offset this fade. Upon cycling, small multilayer nanoflakes develop into exfoliated multilayer nanosheets with increased porosity, providing even better contact between the electrode and the electrolyte and allowing enhanced lithium diffusion and storage.

Alongside the ongoing exploration of new materials, there are some promising options we already know about. For example, the graphite electrodes in standard lithium ion batteries have a specific capacity of only 372 mAh/g, but the specific capacity of a lithium metal electrode is over ten times that, at 3860 mAh/g. Holding back its widespread application is the susceptibility of the lithium to side-reactions and the formation of non-uniform lithium deposits on the electrode, causing safety issues due to potential thermal runaway and severely reducing the battery’s working life.

These lithium deposits, or dendrites, are thought to develop because of an uneven charge distribution and cracking of the solid electrolyte interphase (SEI), a layer which forms at the surface of the negative electrode mostly during the first charge/discharge cycle of the battery. Attempts to resolve the problem are often focused on improving the stability and uniformity of the SEI, but this strategy has rarely been applied to the potentially high energy-density lithium metal battery.

In an Advanced Functional Materials paper, a group at Tsinghua University, China, has described the use of fluoroethylene carbonate (FEC) as an electrolyte additive in the lithium metal battery and confirmed that, in the presence of this additive, dendrite formation does not occur. During charging, the FEC is reduced sacrificially and the forming SEI layer grows rich in lithium fluoride, which suppresses parasitic reactions of the lithium metal electrode with the electrolyte solution and ensures that the deposited SEI remains uniform and stable.

As I tuck my phone into my pocket, I am relieved to think that research like this will soon be relegating spectacular battery fires (and the many recent entertaining videos of them) to the past.