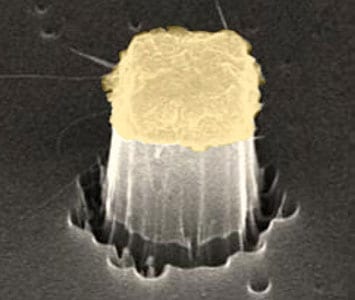 Physics professor Stefan Strauf, Director of the NanoPhotonics Laboratory at Stevens Institute of Technology, and collaborators James Hone and Chee Wei Wong from Columbia University propose an improved fabrication process for carbon nanotubes, potentially leading to brighter light sources and more effective solar cells. They were able to increase the spontaneous light emission from an individual carbon nanotube by two orders of magnitude compared to previously reported experiments. They could also achieve a fourfold prolonged coherence time of the light emission.

SEM image of an individual single-wall carbon nanotube bridging two pillar posts, which are separated 3 μm from centre to centre. The directional growth starts from the Co metal catalyst located on top of the pillars (shaded yellow; Image: I. Sarpkaya et al. / NPG)

Carbon nanotubes have well-established applications in nanoelectronics and more recently have attracted tremendous interest as a nanomaterial for next-generation optoelectronics and quantum photonic devices that have the potential to revolutionize information processing, telecommunications, sensing and measurement. In optoelectronics, carbon nanotubes have the unique ability to maintain the stability of excitons even at room temperature. Photons are absorbed when the electron enters the exciton state and light emitted when the electron recombines with the hole. The absorption can be used to create solar cells, while the emission can be used to create devices like LEDs, lasers, and quantum light sources.

Despite the promise of this innovative material, its light emission has generally been dimmer than theorists had expected. The majority of experiments on CNTs to date reveal low quantum efficiencies as well as dependence on the environment and chemical processing. This is detrimental to their usefulness in devices and other applications. According to Strauf, “Understanding the intrinsic photophysical properties of carbon nanotubes is very interesting scientifically and also essential to realizing efficient devices.” The researchers now discovered that impurities introduced by the growth techniques and their proximity to a substrate mask the intrinsic optical properties. Their ultraclean and air-suspended carbon nanotubes can potentially lead to brighter light sources and more effective solar cells. According to Stevens’ physics department head Rainer Martini, “this work constitutes a major advance in carbon-nanotube based photonics and will generate even more interdisciplinary inquiry in this field.”