Professor Weiping Cai and co-workers have investigated the laser ablation/irradiation in liquid technique for producing nanomaterials. 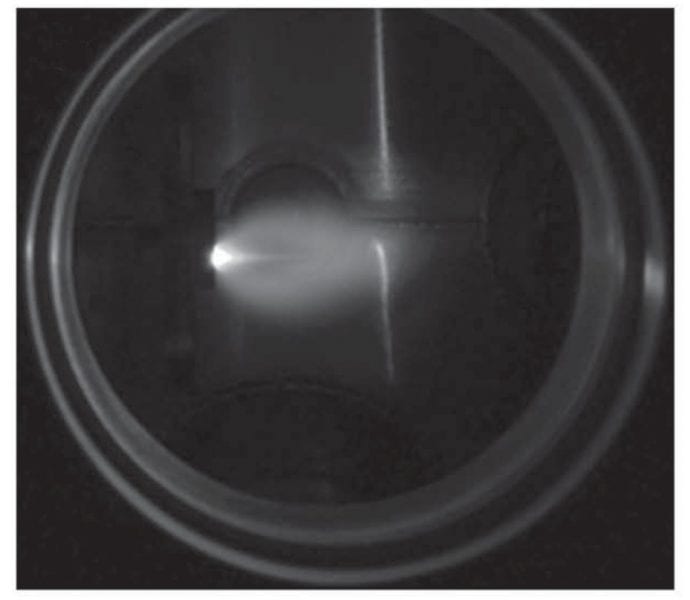 A plume is ejected from an SrRuO3 target as it is irradiated with a laser as part of the ablation process.

Laser ablation/irradiation in liquid (LAL) is an environmentally friendly technique that can be carried out in water or organic liquids under ambient conditions. A valuable new review by Professor Weiping Cai and co-workers details the mechanisms and methodologies involved in LAL, the nanostructures that can be obtained, and their wide-ranging applications.

According to the authors, the most common products of laser ablation are metal-based nanoparticles. Because of the extreme local conditions of high temperature and pressure generated by the laser, nanoparticles with unusual phases can be obtained. For example, TiO2 nanospheres within which the rutile and anatase phases coexist have been fabricated. Nanostructures with a more complicated morphology can also be fabricated; hollow and core/shell nanostructures, for example. LAL can also generated products based on metal hydroxide, sulfide, graphite, and silicon.

The applications of LAL-formed nanomaterials are many and surprising. Nanoparticles funtionalized in-situ during the LAL process are taken up by cancer cells in a temperature-controlled manner. LAL has also been used for the fabrication of luminescent semiconductor nanoparticles with unique photoluminescent properties. Surface-enhanced raman scattering (SERS) has been carried out on surfaces composed of LAL-fabricated nanoparticles with an improved sensitivity and reproducibility. LAL has even been used to create nanofertilisers; materials that stimulate the growth and germination of plants.

The researchers conclude that LAL is an environmentally friendly and rapid technique for the synthesis of nanostructures from simple precursors and in the absence of catalysts. The authors also share their views on how future research into this technique should unfold.