Rice University strategy turns negatively charged carbon nanotubes into liquid crystals that could enhance the creation of fibers and films. 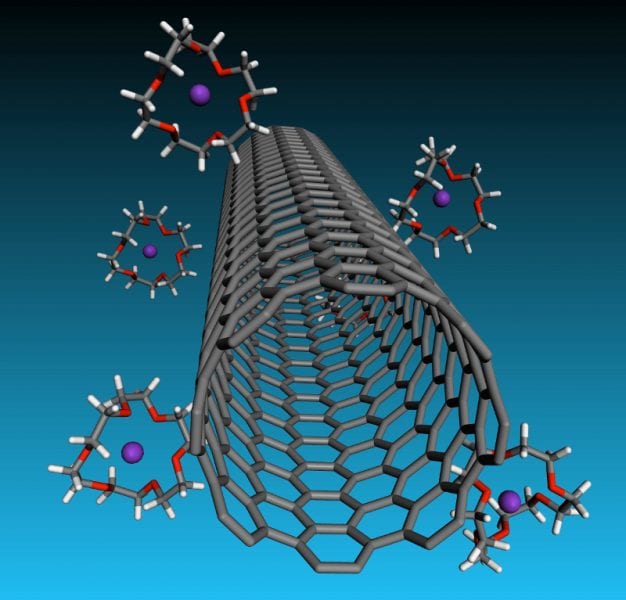 A Rice University laboratory’s cagey strategy turns negatively charged carbon nanotubes into liquid crystals that could enhance the creation of fibers and films.

The latest step toward making macro materials out of microscopic nanotubes depends on cage-like crown ethers that capture potassium cations. Negatively charged carbon nanotubes associate with potassium cations to maintain their electrical neutrality. In effect, the ethers help strip these cations from the surface of the nanotubes, resulting into a net charge that helps counterbalance the electrical van der Waals attraction that normally turns carbon nanotubes into an unusable clump.

Carbon nanotubes have long been thought of as a potential basis for ultrastrong, highly conductive fibers – a premise borne out in recent work by Rice professor and co-author Matteo Pasquali – and preparing them has depended on the use of a “superacid,” chlorosulfonic acid, that gives the nanotubes a positive charge and makes them repel each other in a solution.

Martí and first authors Chengmin Jiang and Avishek Saha, both graduate students at Rice, decided to look at producing nanotube solutions from another angle. “We saw in the literature there was a way to do the opposite and give the surface of the nanotubes negative charges,” Martí said. It involved infusing single-walled carbon nanotubes with alkali metals, in this case, potassium, and turning them into a kind of salt known as a polyelectrolyte. Mixing them into an organic solvent, dimethyl sulfoxide (DMSO), forced the negatively charged nanotubes to shed some potassium ions and repel each other, but in concentrations too low for extruding into fibers and films.

That took the addition of ether molecules known as 18-crown-6 for their crown-like atomic arrangements. The crowns have a particular appetite for potassium; they strip the remaining ions from the nanotube walls and sequester them. The tubes’ repulsive qualities become greater and allow for more nanotubes in a solution before van der Waals forces them to coagulate.

At critical mass, nanotubes suspended in solution run out of room and form a liquid crystal, Martí said. “They align when they get so crowded in the solution that they cannot pack any closer in a randomly aligned state,” he said. “Electrostatic repulsions prevent van der Waals interactions from taking over, so nanotubes don’t have another choice but to align themselves, forming liquid crystals.”

Liquid crystalline nanotubes are essential to the production of strong, conductive fiber, like the fiber achieved with superacid suspensions. But Martí said going negative means nanotubes can be more easily functionalized — that is, chemically altered for specific uses.

“We feel we’re bringing a new player to the field of carbon nanotechnology, especially for making macroscopic materials,” he said.