With the bizarre idea that the continents are moving parts, geoscientist Alfred Wegener helped piece the world together. 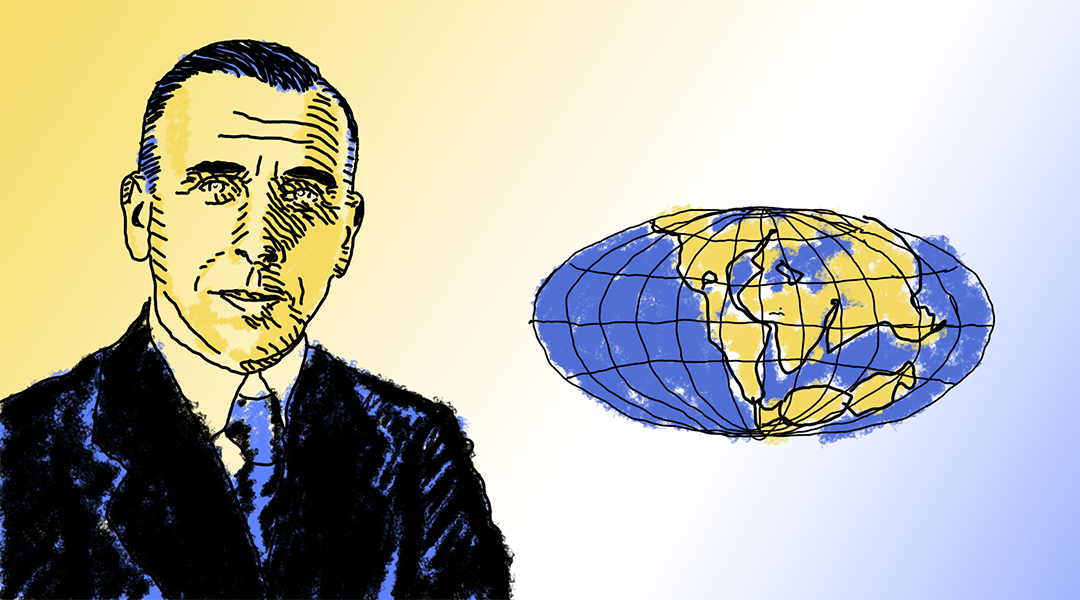 Alfred Wegener was a German scientist with an idea: the continents were not static, but moving bodies that crept slowly across the Earth’s surface, fueled by the deposition of magma on the seafloor at mid-ocean ridges. This concept, called continental drift, explains many previously unexplained geologic phenomena, from volcanic activity to mountain building. Upon publishing this theory in 1912, Wegener was met with skepticism and ridicule, but his theory now serves as the guiding framework of geology.

Wegener’s education can only be described as a shotgun blast across the physical sciences. After studying physics, meteorology, and astronomy at institutions across Europe, he received his Ph.D. in astronomy in 1905. Despite this initial trajectory, Wegener always had an affinity for the Earth sciences, and gravitated toward the fields of climatology and meteorology, which at the time, were still in their infancy. After completing his doctorate, he reconnected with his brother Kurt at the Aeronautisches Observatorium Lindenburg, where they both served as research staff. The brothers shared a mutual love for meteorology, and, together, pioneered the use of weather balloons in meteorological research, eventually setting a record for the longest continuous balloon flight in 1906.

Wegener took four expeditions to Greenland during his career, the first of which lasted from 1906-1908. The goal was to map the remaining uncharted portions of the territory’s north-eastern coastlines. Here, Wegener established the first permanent meteorological station where he launched kites and weather balloons to take in-situ measurements of Arctic weather for research on polar air circulation. Despite three members of the research team perishing in the oppressive Arctic weather on this first expedition, valuable scientific data was collected by Wegener and his colleagues.

Putting the pieces together

In 1911, serving as a professor of meteorology at the University of Marburg, Wegener stumbled upon a paper that denounced the widely held theory that a land bridge once connected America and Europe. The paper argued that the proposed land bridges did explain the presence of similar fossils found on continents separated by oceans. For example, remains of the Mesosaurus — a freshwater reptile — were found in Africa and South America, separated by the salty Atlantic Ocean. However, the paper noted that disappearance of these land bridges did not make physical sense.

If a land bridge had somehow been pushed downward into the Earth’s crust due to an unknown prevailing force, the mass of land should then have sprung back to the surface based on isostasy — the equilibrium between the crust and the mantle such that the crust “floats” on the mantle, like blocks of wood in water.

This paper served as motivation for Wegener to explore this mystery. He noticed that the coastlines of the continental shelves of certain land masses fit together like a puzzle, such as Western Africa and Eastern South America. He also found that some similar geologic features were also separated by oceans. For example, geologic strata in South Africa match up with strata in Brazil, and the Appalachian Mountains have a similar composition to the Scottish Highlands, suggesting that these features formed in the same place.

When analyzing these pieces of evidence, Wegener settled upon a new explanation: continental drift. He postulated that the continents were not stagnant, but instead gradually moved over the Earth’s surface at an incredibly slow rate over millions of years. As such, he believed that this movement once caused the formation of a supercontinent, Pangaea, explaining the distribution of similar fossils and geology across the globe. However, he was unable to deduce the mechanism and thought, at the time, that the Earth’s own centrifugal force could be behind it.

Wegener presented this idea in the first edition of his book, titled The Origin of Continents and Oceans, published in 1915. Since Wegener was not a formally trained geologist, his theory was met with skepticism from experts in the field. Some of this apprehension was due to a misunderstanding in the communication of continental drift theory — Wegener argued that the coastlines of the continental shelves (200 meters below the current shoreline) fit together, not the present-day coastlines. Wegener, a fluent German speaker, struggled to defend his own work at conferences and symposiums because, at this time, geology was predominantly populated with American scientists.

Later in his career, he began shifting his research interests toward reconstructing past climates — a discipline now known as paleoclimatology — with his colleague Milutin Milanković. During his final expedition to Greenland in 1930, Wegener led 14 scientists to establish three permanent weather stations, the purpose of which was to measure the weather and thickness of the ice sheets year-round — data that had not yet been collected. Tragically, in an attempt to return from resupplying a camp that had been cut off from the expedition’s basecamp by vicious Arctic weather, Wegener died from overexertion. His body still lies underneath 100 meters of snowpack.

While Wegener may have died facing rejection from the community he was so interested in being a part of, two decades later, his theory began to hold water with the discovery of seafloor spreading. Following World War II, sonar became commonplace on ships, and data on ocean depth was collected at an unprecedented rate. These data generated relief maps of the ocean floor, which revealed mountain ranges at the center of Earth’s oceans, running parallel to the continental shelf coastlines.

These features are known as mid-ocean ridges, and here, molten rock is carried to the surface through volcanic activity, where it cools to create new seafloor. This process slowly pushes older seafloor away from the ridges, causing the seafloor to spread. As geologists began to date samples of oceanic crust, they confirmed that the seafloor got older the farther it was from these ridges. The widespread acceptance of a widening seafloor provided the mechanism that Wegener was missing from his original proposal, and subsequently led to a revisit of his ideas.

Alfred Wegener stood his ground in the face of a community that publicly rejected his idea — an idea that is now one of the cornerstones of geology. Fundamental concepts like plate tectonics, continental drift, formation of volcanic arcs, and supercontinents that current geoscientists build their research on would not be as thoroughly understood now without Wegener. In a world so staunch in its scientific understanding, Wegener yearned to push the boundaries of human knowledge, and fearless renegades like him are the ones who will shape our future.