Credited as one of the first computer scientists, Ada Lovelace saw the potential of computers a century before any were ever built. 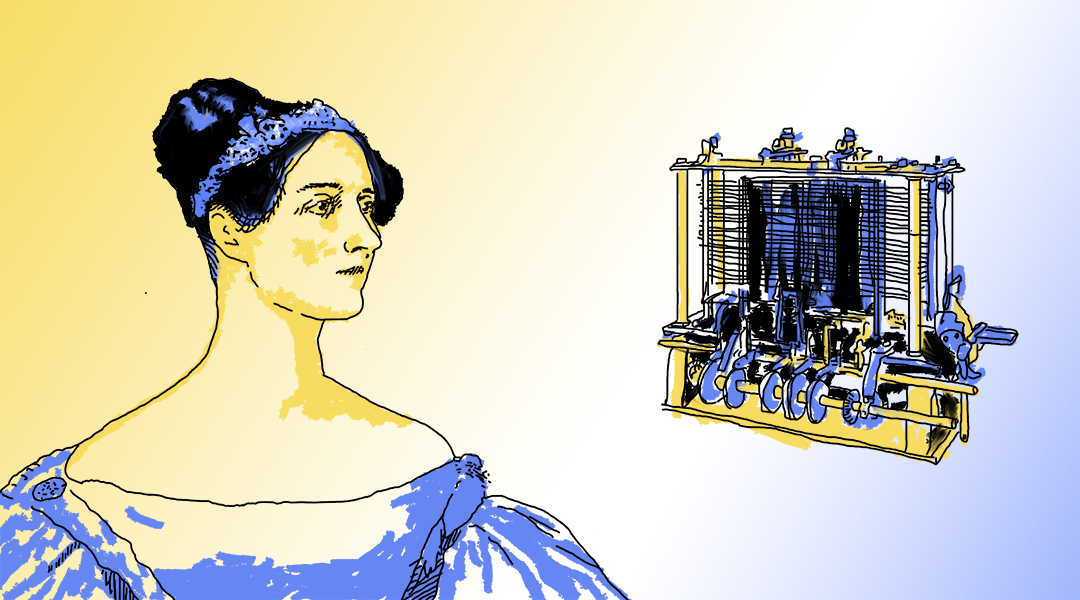 Daughter of the English poet, Lord Byron, Augusta Ada King, Countess of Lovelace — better known as Ada Lovelace — was a mathematician credited for writing the first computer program in the 1840s.

The early computing machine, which existed only on paper, had been designed by mathematician and inventor Charles Babbage, with whom she was collaborating at the time. The machine was intended to carry out simple calculations much more efficiently than humans, but Lovelace saw beyond the narrow application of simple calculation and was the first to articulate the notion of computation, essentially an embryonic idea of a “computer program”.

Though historians are uncertain about whether the program — a series of steps in which the machine could calculate Bernoulli numbers — was actually written by her or Babbage, whether she did or not, Lovelace saw something in those designs that nobody else, not even Babbage, did.

Perhaps better referred to as a “prophet of the computer age”, this edition of Pioneers in science celebrates the life and visionary work of Ada Lovelace, one of the first computer scientists.

A strict childhood immersed in study

Born in London in 1815, Lovelace was the only legitimate daughter of Lord Byron and his wife, Lady Anne Isabella Milbanke Byron. Their marriage was not a happy one, with Lady Byron believing her husband to be verging on insanity. A few weeks after Lovelace’s birth, the couple separated and Lord Byron went abroad, never to see his daughter again.

Lady Byron was said to be very intelligent, though domineering, with a great interest in mathematics herself. She supposedly feared that her daughter would follow in her father’s footsteps, and so Lovelace lived a very disciplined childhood immersed in strict study with an emphasis on mathematics and geography.

At the time, women’s rights in England were severely restricted and the study of mathematics was thought to be too strenuous for their mental capabilities — but being born into aristocracy has many advantages.

There were several prominent female figures within the maths and sciences at the time, such as Lovelace’s mentor and instructor, Mary Sommerville, one of the first two women to be permitted to join the Royal Astronomical Society along with astronomer Caroline Herschel. The caveat it would seem was that in addition to ability, one needed to have money to be a woman and study math.

In London at the time, there lived a gentleman scientist named Charles Babbage. Known now as “the father of the computers”, Babbage is famous for having designed but never having built the world’s first computer.

He was a complex and colorful character described by scientific historians as touchy, volatile, proud, and often flat-out rude, though he was somehow able to get away with these foibles through his charm and charisma. A Cambridge graduate, he was elected a fellow of the Royal Society in 1816, and eventually became Lucasian Professor of Mathematics in 1828.

It was at one of his Saturday night soirees in 1833, which always included the who’s who of the London science scene, that Babbage demonstrated a prototype of a device he had been fastidiously working on called the Difference Engine.

After becoming frustrated with the number of errors made by human calculators in data tables used in navigation and astronomical calculations, Babbage had sought a solution to human fallibility, famously lamenting in 1821, “I wish to God these calculations had been executed by steam”.

He put his talents toward building an automated, steam-powered engine capable of performing simple calculations by first programming it with a function and then cranking it by hand to deliver the result. In essence, he had invented the world’s first automated calculator.

Lovelace and her mother, who were in attendance at the party, became fascinated with the device, and afterward, Lovelace, then 17 years old, reached out to Babbage and requested the machine’s blueprints to study. This began a decade-long passion for Lovelace, who, along with her mother, became seriously interested in what this “thinking machine” could accomplish.

Over the coming years, Babbage and Lovelace struck up a regular correspondence in which they discussed the Difference Engine and a number of other mathematical ideas. In 1835, she married William King and when he was created an earl in 1838, she became Countess of Lovelace.

Lovelace continued to educate herself through Babbage, numerous correspondence courses, and family connections with brilliant mathematicians of the day. While she is said to have been an adequate though not overtly gifted mathematician, scholars define Lovelace’s greatest skill being her visionary view of what math could achieve, not only understanding concepts, but appreciating their possibilities.

This would become most apparent in a set of notes that would come to define her reputation.

By the 1830s, Babbage had moved on from the Difference Engine without ever really completing it, focusing his attention on a new and more complex device called the Analytical Engine. The new device embodied logical features of the modern digital computer, but without Lovelace, the distinction between mechanizing calculations and digital computation might not have been made at the time.

It began with Babbage giving a lecture in Milan about the Analytical Engine, which was written up and published in French in a Swiss journal by the Italian mathematician Luigi Menabrea. Lovelace translated the article to English, while at the same time providing her own set of comments — and even some corrections — which turned out to be three times as long as the original manuscript.

These notes contained statements that, from a modern perspective, are visionary, demonstrating that Lovelace had seen something that Babbage had not, which was that the new engine did not have to be confined to just numbers and mathematics. “The Analytical Engine”, she wrote, “holds a position wholly its own.”

Lovelace envisioned the machine’s digits representing something other than quantity, such as a musical note, an image, or a letter of the alphabet, and described it carrying out “symbolic manipulations” based on a set of rules. In her now famous note “G”, Lovelace included a step-by-step description for how the engine could carry out a computation of Bernoulli numbers — the basics of an algorithm. She also theorized a method for the engine to repeat a series of instructions, a process known as looping that computer programs use today.

This joint collaboration between Babbage and Lovelace was published in 1843, and Lovelace used only her initials “A.A.L.,” in the publication — not uncommon for women to do when publishing works was deemed to be suitable only for men.

Though she has been given credit as “the first computer programmer” as a result, there is a bit of controversy around this title as the work for the algorithm itself was thought to have been Babbage’s. However, there is no doubt that she was pivotal to the development of Babbage’s thinking and independently grasped the concept of a general purpose digital computer.

Her notes are praised as the earliest and most comprehensive account of computers, predating modern examples by almost a century. Lovelace’s article attracted little attention when she was alive, and her ideas were never put into practice. She died in 1852, likely from cancer, and was buried alongside her estranged father with her work forgotten for nearly a century.

It wasn’t until 1953, when B.V. Bowden published Lovelace’s work in Faster Than Thought: A Symposium on Digital Computing Machines, that Lovelace’s contributions to the field of computer science finally gained recognition and she was acknowledged as a pioneer in computer programming.

Alan Turing published a paper in 1950 (three years prior to her popularization by Bowden) in which he disputed her proposition that while computers had endless potential, they could not be truly intelligent.

“It is desirable to guard against the possibility of exaggerated ideas that might arise as to the powers of the Analytical Engine,” she had written. “The Analytical Engine has no pretensions whatever to originate anything. It can do whatever we know how to order it to perform. It can follow analysis, but it has no power of anticipating any analytical relations or truths.”

Turing, on the other hand, believed the opposite, arguing that her speculation meant that “computers [could] never take us by surprise”. His famous Turing test, a method of determining whether a machine can demonstrate human intelligence, was countered by the Lovelace Test by Bringsjord, Bello and Ferrucci in 2001, which requires that a computer show creativity that is clearly independent of its programming. The Lovelace test has not yet been met.

Lovelace was a visionary thinker, providing one of the main conduits for subsequent generations to understand and perhaps appreciate the significance of Babbage’s work. Lovelace has received many posthumous honors as a result, and in 1980, the U.S. Department of Defense named a newly developed computer language, “ADA”, after her.