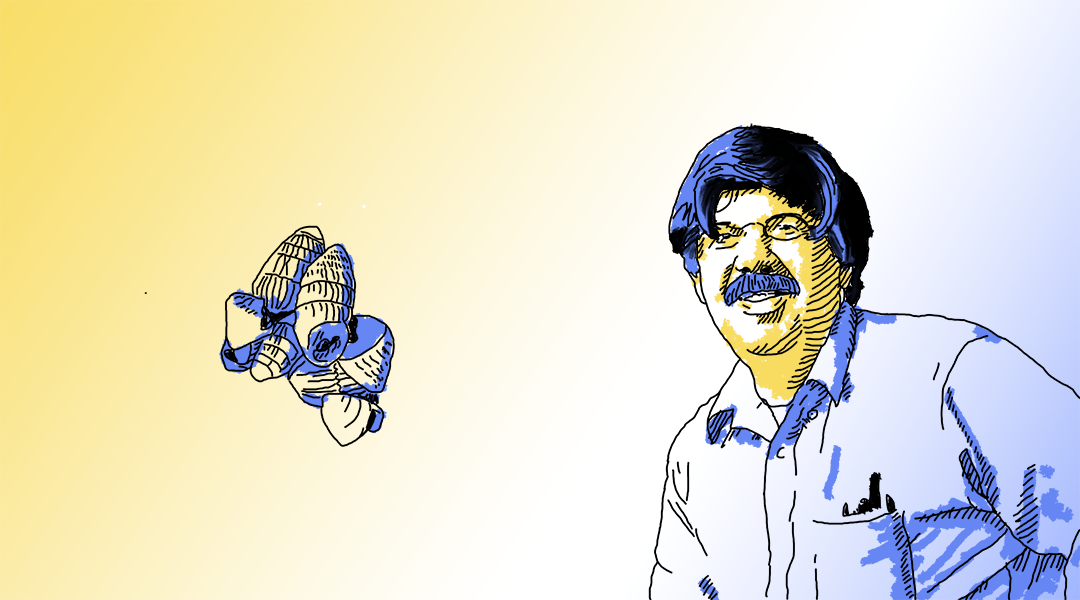 Almost exactly 50 years ago, in August 1972, a revolutionary idea was born. Despite the ongoing Watergate Scandal, the Vietnam War, and the mass movement against it, this idea was not political, but scientific.

Within a little-known book called Models in Paleobiology — a collection of papers by various paleontologists and evolutionary biologists — appeared an article titled, Punctuated Equilibria: An Alternative to Phyletic Gradualism by Niles Eldredge and Stephen Jay Gould.

Their paper proposed that the evolution of species is not slow and gradual, and forever in motion at a constant rate — a theory of evolution known as phyletic gradualism — but that once a species emerges, it remains relatively stable, and if it evolves into a new species — a process called speciation — this is relatively quick and sudden (at least, on a geological timescale).

They called this view of evolution “punctuated equilibrium”, and this idea caused a sensation within the world of evolutionary biology, with supporters hailing the theory as a revolution, and critics attacking the idea as anti-Darwinian. But Stephen Jay Gould always maintained that punctuated equilibrium does not overturn Darwinian evolution — the laws of natural selection still applied, for example — but is simply a refinement of it.

Gould went on to be one of the 20th century’s most influential popular science writers, writing dozens of books on subjects ranging from evolution, paleontology, the history of science, to art, and even baseball.

In this edition of Pioneers in Science, we take a look at the life and work of Gould and explore how his ideas about evolution sparked a revolution in how scientists view this field, with various new theories and ideas being proposed and argued — sometimes quite contentiously — even to this day.

His work is a fine example of how new ideas, even if they’re not universally accepted, even if they are proved wrong, or right, or have still yet to be proven either way – in short, scientific debate – can be a motor force for paradigm shifts in science.

Gould studied at Antioch College, majoring in geology and philosophy, as well as at the University of Leeds, and after post-graduate work at Columbia University, started work at Harvard in 1967, where he remained for the rest of his career.

He made great contributions to areas such as evolutionary developmental biology, and even introduced the word “spandrel” into the field. Spandrel is originally an architectural term and refers to the triangular space between arches. As Gould considered spandrels to be a necessary by-product of mounting a dome on top of arches, and not something deliberately designed, he coined the term in a biological sense to describe features of organisms that arise as an unintended consequence of that organism’s evolution, rather than something specifically arising from natural selection.

Some biologists consider the human chin to be a spandrel, since we are the only mammals that have one, and it appears to have no obvious biological function. Ever attracting controversy through his work, there is still debate about whether human language — and perhaps even intelligence — is a spandrel. But Gould is most well-known for his contributions to the field of evolutionary theory.

Gould was born on September 10, 1941, in Queens, New York. It is perhaps quite apt that he was born during a time in which, whilst a world war was raging, another war was raging within biology departments in universities the world over.

This centered around how Darwinian evolution could be brought up to date in light of scientific discoveries and insights made since Darwin’s death, such as the discovery of genetic inheritance by Gregor Mendel, whose work was rediscovered and brought back to life at the beginning of the 20th century.

With these new discoveries came new challenges to Darwinian thought. For example, if, as we know, genetic inheritance can “skip” a generation, how can natural selection work, which supposedly relies on advantageous traits passing and being expressed directly from parent to offspring?

Such questions and others raged in the early decades of the 20th century, but Darwinian evolution and genetic variation and inheritance were reconciled in 1942 with the so-called “modern synthesis“.

One particular scientist from this school of thought was Ernst Mayr, who further developed the idea of allopatric — or geographic — speciation. This would turn out to have a huge influence on Gould and Eldredge, as we shall later see.

Whilst new discoveries in genetics complemented Darwinian evolution rather than — as feared — challenging it, other problems persisted. Most notably, the apparent and numerous “gaps” in the fossil record.  If species evolve by phyletic gradualism, why isn’t the fossil record full of “intermediate” specimens? Taking the fossil record at face value, it would seem that speciation is a sudden and spontaneous even, not slow and gradual. Indeed, such questions and arguments were often used by people to discredit Darwin’s ideas and evolution in general.

Darwin himself was well aware that the fossil record was a potential problem for his theory, writing in 1859, “Why then is not every geological formation and every stratum full of such intermediate links? Geology assuredly does not reveal any such finely graduated organic chain; and this, perhaps, is the gravest objection which can be argued against my theory.”

Scientists, such as Mayr, sought to answer these questions by taking allopatric speciation and developing it further, coming up in 1954 with the theory of peripatric speciation, the main points of which are that a smaller section of a species becomes geographically isolated from the rest of its species, which causes genetic isolation. A mixture of strong selection and genetic drift in the smaller, isolated group causes a speciation event i.e., isolated groups of the same species diverge on the evolutionary tree as they can no longer breed with each other as before.

The emphasis here is the isolated group is smaller than the parent group and so, having a smaller sample of genetic variation, rapidly diverges to cause a speciation event.

From sudden jumps to stasis

Gould and Eldredge jumped on these ideas put forward by Mayr, but rather than focusing on the jumps, focused instead on the periods between the jumps, which they posited were stable. This meant that between speciation events, on geologically measurable timescales, species don’t really change — or evolve — at all. Instead, an “equilibrium” is found, wherein species stay as they are until something — a change in climate, habitat, ecology — causes an evolutionary jump. In other words, these long periods of equilibrium are punctuated with speciation events, hence their view of evolution being one of “punctuated equilibria”.

It should be pointed out here that these theories of speciation are not saying that change happens in the blink of an eye. A T-Rex didn’t one day lay a chicken egg, nor did a lioness one day get the shock of her life by giving birth to a cute little moggy. What they are saying, though, is that speciation appears to happen quickly relative to a geological timescale — speciation over perhaps thousands or tens of thousands of years as opposed to millions.

Compared to an organism’s lifetime, this is still gradual change, but when looking at Earth history, this is exceptionally rapid, and is in that sense “sudden”.

Perhaps one of the best-known examples of these sudden evolutionary jumps is the so-called Cambrian explosion. For billions of years, life on Earth was dominated by single-celled organisms and sometime later, the first multi-cellular lifeforms developed. Then about 540 million years ago, there was an “explosion” in speciation during what is known as the Cambrian period, when almost all major animal phyla started appearing in the fossil record.

This diversification lasted for a few million years, which is still within the long timeframes normally associated with the pace of evolutionary change. But when you compare these few million years to the billions of years of relative stasis that came before, this was indeed quite a jump. It’s no wonder the Cambrian explosion is sometimes called the Biological Big Bang.

The idea of punctuated equilibria caused fierce debate amongst evolutionary biologists, and no one could agree if this was a correct model or not. Some critics even joked that Gould’s and Eldredge’s idea is “evolution by jerks”, to which Gould retorted that phyletic gradualism is “evolution by creeps”.

But jokes aside, the publication of the theory of punctuated equilibrium caused ripples through the field, and the following years saw more ideas put forward about what the fundamentals of evolution are, particularly as advances in genomic sequencing took off.

To this day, there is still no consensus on what the true nature of evolution is: is phyletic gradualismor is punctuated equilibria correct? Is it a mixture of the two? Is it neither? Indeed, as recently as June this year The Guardian published a long-read article titled, Do we need a new theory of evolution?

Perhaps Gould made a name for himself with his and Eldredge’s paper, but his career went far beyond biology.

Gould was a prolific writer, and outside of his academic publications, he was an enthusiastic writer of popular science, publishing many books throughout his career. Through these writings, he was never afraid to stray into areas outside of evolutionary biology, perhaps owing to his undergraduate background in philosophy. He was known as a strong critic of human sociobiology and evolutionary psychology, which put him at odds with other well-known scientists in his time, such as Steven Pinker and Richard Dawkins.

In his practical, paleontological work, he focused the great bulk of his career on land snails, in particular the genus Cerion, found in the West Indies.

These unassuming creatures provided Gould with a treasure trove of empirical data to help with his other research interests. Of particular interest to him was how Cerion could unlock the key to understanding what governs biological form, or developmental biology. Gould noted that Cerion are incredibly diverse, with over 600 known species, and with shapes ranging from “golf balls” to “pencils”. And yet with such little genetic differences between these species, he wondered how such diversity could arise. He hoped that answering this question could lead scientists to understand in general how biological form arises.

A pioneer in our time

Gould never ceased to develop his ideas and research on evolution. His endpoint wasn’t his 1972 paper on punctuated equilibria; he spent 20 years working on a magnus opus “to gather in one volume [his] view of how evolution works.” That work is The Structure of Evolutionary Theory, published just two months before Gould’s death in 2002.

The book is certainly a lifetime achievement, covering in one part an overview of the history of the theory of evolution, and in the second part, putting forward the case of Gould’s own ideas and those of his colleagues.

Gould passed away on May 20, 2002, just a few months after being diagnosed with cancer. He left behind a legacy that is still felt in the scientific community today. In the journal Paleobiology, he is the third most-cited author; the only scientists with more citations being Charles Darwin and George Gaylord Simpson, a major contributor to “the modern synthesis”.

Ever a champion of social justice and seeing what’s good in humanity, Gould cautioned against scientists using scientific objectivity as an excuse for passivity, writing in his 1981 book, The Mismeasure of Man:

I grew up in a family with a tradition of participation in campaigns for social justice, and I was active, as a student, in the civil rights movement at a time of great excitement and success in the early 1960s. Scholars are often wary of citing such commitments. … [but] it is dangerous for a scholar even to imagine that he might attain complete neutrality, for then one stops being vigilant about personal preferences and their influences—and then one truly falls victim to the dictates of prejudice. Objectivity must be operationally defined as fair treatment of data, not absence of preference.