PNIPA gels are hybridized with uniaxially aligned inorganic liquid crystalline nanosheet and adsorbed with a dye deform anisotropically by photo-irradiation. 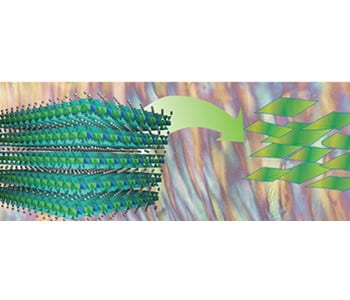 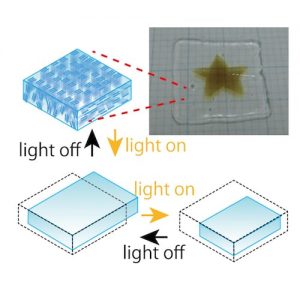 Hydrogels are an important class of soft materials for applications such as soft-actuators and medical materials. While many kinds of functional hydrogels with high mechanical toughness, self-repairing properties, and self-oscillation capability have been developed, fabrication of anisotropic gels with controlled structures and response to multiple stimuli are still challenging.

The research group of Fukuoka Institute of Technology, Japan, led by Nobuyoshi Miyamoto, recently reported a facile synthesis of the photo-responsive anisotropic hydrogel with fully aligned liquid crystal (LC) by utilizing inorganic nanosheet LC. The gel is composed of the well-known thermo-responsive poly(N-isopropylacrylamide) (PNIPAM) gel body, doped with a small amount of liquid crystalline nanosheets which is easily aligned on the centimeter scale by applying an electric field during the synthesis. Further, the gel is printable with cationic dyes to form photo-responsive patterns on and inside the gel with micrometer-scale resolution.

Upon photo-irradiation, the colored part of the film-shape gel shows anisotropic deformation. Interestingly, anomalous expansion is also observed, which have never been observed in a conventional PNIPAM gel. Since the combination of any kinds of nanosheets, polymers, and dyes is possible, the present method is versatile for the synthesis of the soft materials with anisotropic responses to multiple stimuli and for optimization of the functions for applications such as soft actuators.