A host–guest–guest material demonstrates the photoreversible on–off recording of persistent room-temperature phosphorescence from the phosphorescent guest. 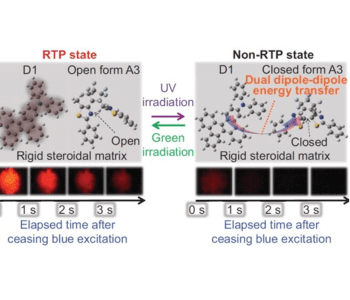 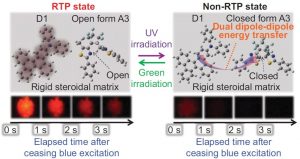 Imaging technologies that exploit emitting probes have clarified a variety of information for in-vivo environments, because the emission can be detected with high sensitivity and high resolution. Typical readouts are obtained as fluorescence signals from the emitting probes when under excitation.

Recently, materials with persistent luminescence have become increasingly important for use as emitting probes for the in-situ visualization of in-vivo environments. Imaging using persistent emission has the advantages of being independent of both the fluorescence from living tissues themselves and the scattering of excitation light, because persistent emission lasts long after ceasing photoexcitation.

However, after the systemic injection of probes, images of persistent luminescent often range over a wide area in vivo because it is typically difficult to accurately target the probes. In this situation, the persistent luminescence from numerous other probes that move separately from or harmoniously with target probes often prevents the movement of the targets being detected.

S. Hirata (Tokyo Institute of Technology) and co-workers demonstrate that the reversible on–off switching characteristics of red persistent emission when used as a emitting probe is a candidate to resolve this problem. The emitting probes are host–guest composite materials composed of an aromatic deuterated carbon, a photochromic diarylethene, and an amorphous hydroxyl steroidal host. The red persistent emission function of this host–guest material is deactivated by UV irradiation and reactivated by irradiation with green light.