Using plasmonic hotspots, gold nanostructures can be melted and made to produce the smallest nanojets ever observed. 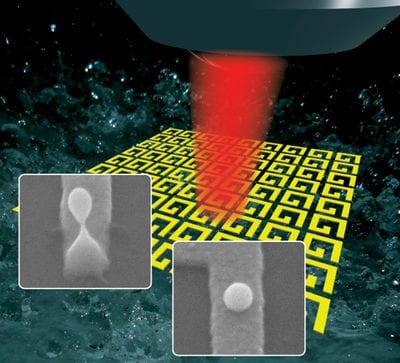 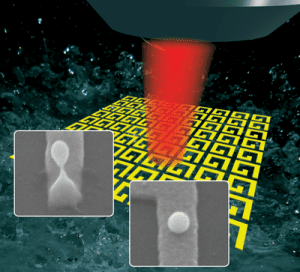 KU Leuven researcher Ventsislav Valev and an international team of scientists have developed a new method for optical manipulation of matter at the nanoscale. Using ‘plasmonic hotspots’ – regions with electric current that heat up very locally – gold nanostructures can be melted and made to produce the smallest nanojets ever observed. The tiny gold nanodroplets formed in the nanojets are perfectly spherical, which makes them interesting for applications in medicine.

The ‘backjet’ phenomenon on which the method turns can be compared to a pebble being dropped into water. Tightly focused ultrafast laser pulses carry sufficient energy to locally melt the surface of a gold film. When a laser pulse of light hits the film, a nanoscale backjet – a nanojet – of molten gold surges upward.

As the name suggests, nanojets on the surface of a homogeneous gold film are incredibly small, their size being determined by the distribution of energy in the light pulse. This distribution of energy is in turn dependent on the wavelength of light. Initially, scientists anticipated that nanojets could not be significantly smaller than the wavelength of light. In this study however, Ventsislav Valev and his colleagues show that nanojets can in fact be made much smaller with the help of ‘plasmonic hotspots’.

Plasmonic hotspots are regions on the surface of metal nanostructures where light causes very strong oscillation of the electrons. Because electron oscillations constitute an electric current and because electric currents heat up the material the same way an electric stove heats up in the kitchen, the plasmonic hotspots are extremely hot. So hot that they can melt the gold in a spot much smaller than the wavelength of light. Dr. Valev and his colleagues were successfully able to demonstrate that this tiny little pool of molten gold can give rise to the smallest nanojets ever observed.

The research is published in Advanced Optical Materials, a new section in Advanced Materials (2010 Impact Factor: 10.880) dedicated to breakthrough discoveries and fundamental research in photonics, plasmonics, metamaterials, and more. Advanced Optical Materials will cover all aspects of light-matter interactions. It will include communications, full papers, and reviews. Look for the first edition in Spring 2012.