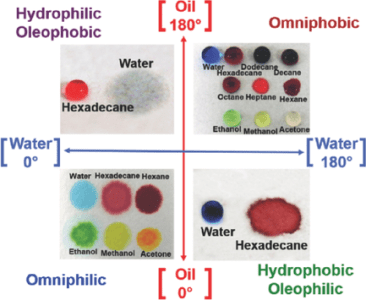 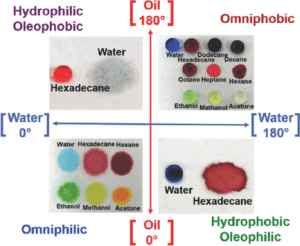 Microfluidics, or the manipulation of tiny volumes of liquids, is a widely used research technique for multiple applications including the high-throughput screening of blood and chemical samples. Conventional microfluidic devices are closed channels made from silicon or glass. They are produced in clean rooms with semiconductor fabrication technology, which is expensive and time-consuming. Paper microfluidics is an emerging field focused on creating inexpensive devices, with simple fabrication methods. The technique works by confining liquids within channels with different surface energies or wettability rather than physical walls. However, paper-based microfluidic devices thus far have largely been limited to working with relatively high surface tension liquids such as water. Many significant biological and chemical reactions are carried out in non-aqueous liquids, or at interfaces between immiscible liquids.

Tuteja et al. discuss a facile methodology for the fabrication of surfaces with extreme wettabilities, i.e. surfaces that display all four possible combinations of wettabilities with water and different oils: hydrophobic-oleophilic, hydrophilic-oleophobic, omniphobic and omniphilic. Together these are referred to as “extreme wettabilities”. Open channel, paper-based microfluidic devices fabricated using these surfaces with extreme wettabilities allow for the localization, manipulation, and transport of virtually all high- and low- surface tension liquids. This ability expands the utility of paper-based microfluidic devices to a range of applications never before considered, including, separating oil-water mixtures, extracting dissolved chemicals, generating uniform emulsions and microparticles, patterning of cell for directed tissue engineering, as well as the precise measurement of any mixtures composition.