Steps to Remedy In Vitro–In Vivo Discrepancies: Nanoparticle Interactions with Blood and Lymph

Interactions of nanoparticles with their surroundings, both in vitro and in vivo, are different simply because the environments are different. As such, the first insight towards answering complex questions associated with in vitro-in vivo translation are provided. 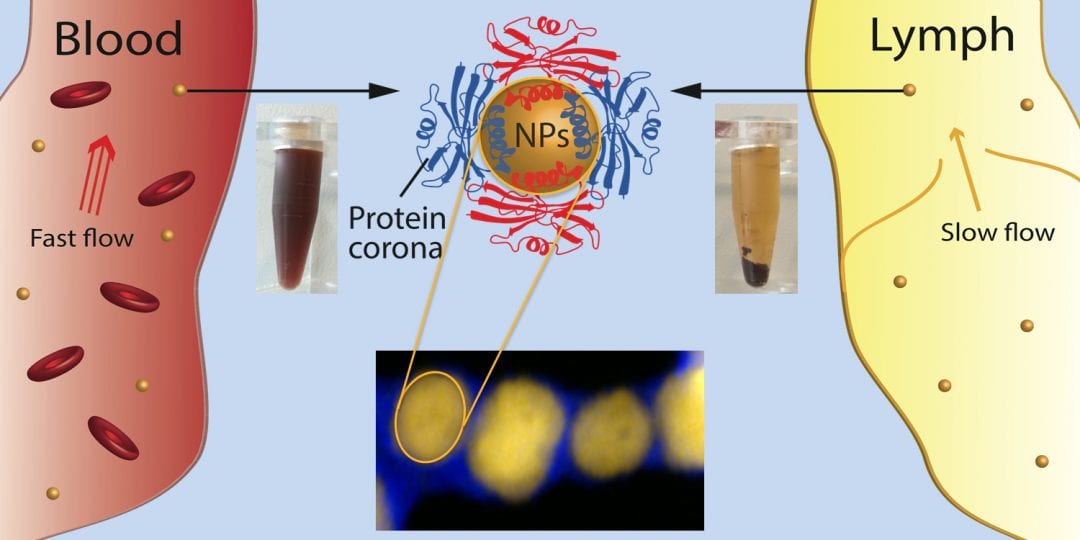 The surfaces of engineered nanoparticles (NPs) determines their biological behaviour. However, when NPs are in contact with the bioenvironment, the formation of the protein corona (PC) itself – a surface coverage by biomolecules (mostly proteins) – then modifies and controls their biological interactions. Unfortunately, the PC formed in vitro is different to that formed in vivo, which disables translation of research results into clinics. Therefore, in thelast decades much research has been devoted to the study of the PC formed on various NPs with different properties in blood-derived fluids.

Nevertheless, understanding and controlling the biological behaviour of NPs is still an open challenge. This is especially the case for most nanomedicines, which are typically injected either into the blood or lymph stream.While it is known that injection into the blood or lymph of patients has different consequences, what is not known is whether this injection into the blood or lymph influences the PC? Does the PC change if NPs transit from lymph to blood or vice versa and, if it changes, does the PC after the transition resemble more closely the PC of the first or last fluid? What if the flow conditions in blood or lymph are normal (as in healthy people), or if their flows are higher/lower due to diseases? What if both the flow and fluid change simultaneously, as occurs during transit in the body? Experimentally, how can one study these changes in vitro and their influence on the PC?

These are just some of the questions that a multidisciplinary team of researchers from Switzerland set out to answer in their recent article, Protein corona: impact of lymph vs blood in a complex in vitro environment. These questions prompted the authors to interrogate the foundation of current in vitro research, which generally are experiments with static, blood-derived fluids, to instead elucidate new approaches from which the problem should be tackled.

Novel parameters that could influence the nature of the PC in vitro and which would better mimic the complexity of the in vivo conditions are investigated. Firstly, the fact that biofluids are dynamic by nature, and that blood is not the only biofluid that NPs encounter on their “journey” through the body was considered. In vitro experiments were made that included simultaneous dynamic and fluidic variations, which, although well known to occur in vivo, are often neglected.

More precisely, they studied the so-far unconsidered contributions to the PC of lymph vs blood under different flow conditions, and the transition from one extracellular fluid to another. In this way lymph, which had so far been overlooked, was for the first time explored in interactions with NPs. It is shown that simultaneous inclusion of these novel parameters leads to dramatic changes in the PC, starting from the apparently different colloidal stability up to different composition of the final PC.

Moreover, by mimicking simultaneously fluidic and dynamic variations to which NPs are exposed in vivo, for the first time the correlation of PCs with the different biological behaviours of NPs was shown, derived from the different administration routes or illnesses related to changes in circulation/flow. Beyond these results related to the “big picture” of bio-nano-interactions, the data suggests that some proteins in the PC adhere via force-promoted binding (catch bonds), and that preferentially-bound proteins are rich in chemical groups with high affinities for binding to the surface of NPs.

Finally, the work illuminates the simple fact that interactions of NPs with their surrounding in vitro and in vivo are different simply because the environments are different. As such, the first insight towards answering the complex questions described above is provided.

Fully solving these questions are an ambitious aim which will need numerous further studies. These for instance should bring in vitro environments closer to matching those of the in vivo environment, by focusing not only on factors of 3D cell arrangement and extracellular matrix design, which are also vitally important, but also by considering dynamic and fluidic variations and transitions, as shown to impact the nano-bio-interface in this research.

Kindly contributed by the authors, and edited by Jodie Haigh.

With a 2016 ISI Impact Factor of 8.64, Small continues to be among the top multidisciplinary journals covering a broad spectrum of topics at the nano- and microscale at the interface of materials science, chemistry, physics, engineering, medicine, and biology.