Organization and Transport of Cell Chain Through Optofluidics

A team of Chinese researchers demonstrated an optofluidic strategy, by implanting the microfluidic technique with a large-tapered-angle fiber probe (LTAP), to organize and transport a cell chain in a noncontact and noninvasive manner.

The ability to flexibly manipulate cells in a fluid, especially to organize a cell chain and further to transport it to a designated position, has been proved to be crucial in cell analysis, disease diagnosis, drug delivery and for many more applications in the biological and medical fields. Diverse strategies have been proposed to perform the organization and transport of a cell chain, but nevertheless, all these strategies face several challenges like potential sample heating and high power consumption. 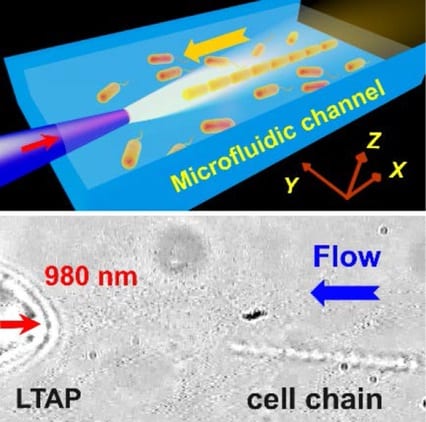 In recent years, optofluidics, emerging as a combination of photonics and microfluidic techniques in a lab-on-a-chip platform, has enabled the precise control of cell behaviors and non-invasive biological analysis. Migration and separation of blood cells were also reported using optical scattering force in microfluidic systems. With the advantages of compactness in configuration and ease in sample access, optofluidic devices based on planar optical waveguides have been successfully demonstrated to trap and transport particles, cells and biological macromolecules. However, in those optofluidic approaches based on planar waveguides, the transport paths are fixed on the substrate once the waveguides were fabricated.

An alternative optofluidic method, which enables manipulations free from the limits on the transport path on a substrate, is to implant a large-tapered-angle fiber probe (LTAP) into the microfluidic platform. A team of scientist from the Institute of Nanophotonics of the Jinan University in China recently showed this by demonstrating a controllable organization of cell chain by using an LTAP implanted into a microfluidic channel.

The cell chain can be transported via the adjustment of laser power and flow velocity, which has great potentials for the dynamic manipulation of blood cells in vivo and precise diagnose of vascular diseases. With the implantation of the LTAPs into microfluidic platforms, the proposed technique is expected to provide new opportunities for cell biology, drug delivery and diagnose of vascular disease.

Schematic of optofluidic organization and transport of cell chain.

"Evolution‐on‐a‐chip" device helps reveal mutations that lead to superbugs
Dengue and Zika make their hosts more attractive to mosquitos
microRNA Clusters as Markers for Cancer
How can we make CRISPR safer?