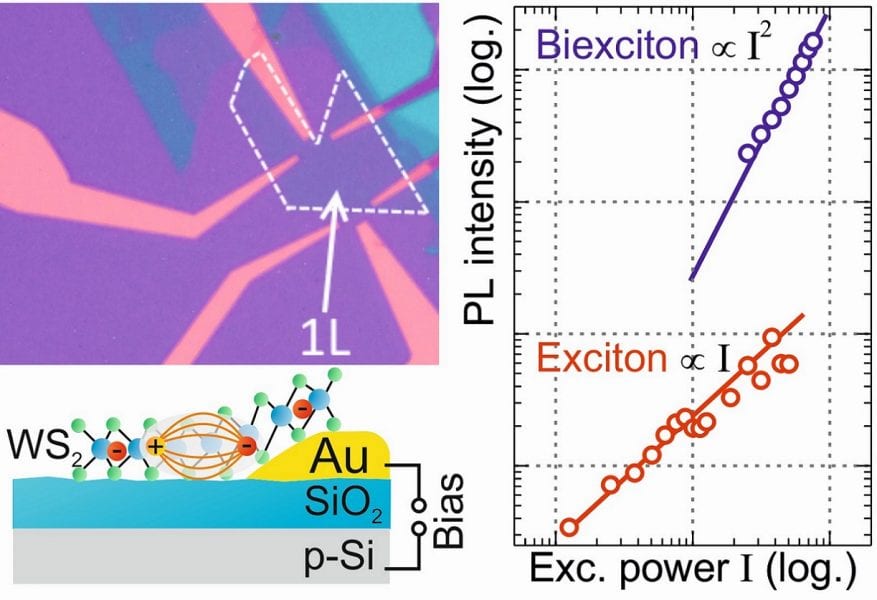 Two-dimensional crystals, which can be prepared from bulk materials with a layered crystal structure by exfoliation, are a fascinating new research topic in condensed matter physics. In the wake of graphene, monolayers prepared from many other materials are currently being investigated. WS2 (tungstenite) is a semiconducting transition-metal-dichalcogenide. While the bulk material has an indirect band gap and negligible photoluminescence (PL) yield, the band structure changes to a direct gap in the monolayer limit. The confinement of electrons and holes in the monolayer leads to very strong Coloumb interaction and the formation of tightly bound electron-hole pairs called excitons, which are stable even at room temperature and directly observable in photoluminescence experiments. The exciton binding energy is an order of magnitude larger than in more conventional, three-dimensional semiconductors. The large Coulomb interaction also supports the formation of more complex quasi-particles containing additional carriers, such as charged excitons (trions) and ‘molecules’ consisting of two excitons (biexcitons). However, the assignment of emission peaks in the low-temperature photoluminescence spectrum of monolayer WS2 to different quasi-particle states is complicated by emission originating from defect-bound excitons. 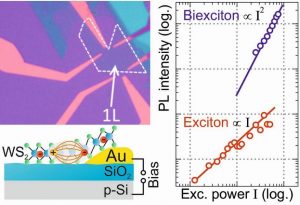 A group of scientists at the University of Regensburg have studied the photoluminescence of gated monolayer WS2 flakes, in which the carrier density is controlled by an external bias voltage. This control allows the unambiguous identification of neutral exciton and trion emission in the photoluminescence spectrum. Using power-dependent photoluminescence measurements, they are able to identify the biexciton emission, whose intensity has a characteristic, quadratic dependence on excitation power.

The strongly bound exciton, trion and biexciton complexes in tungstenite are highly interesting objects to further our understanding of many-body physics in condensed matter, but they may also be exploited in future quantum-optic devices based on two-dimensional crystals.