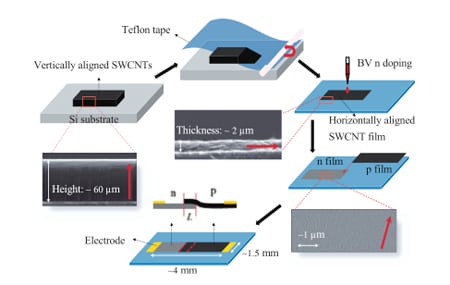 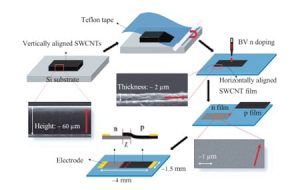 Using carpets of aligned carbon nanotubes, researchers from Rice University and Sandia National Laboratories have created a solid-state electronic device that is hardwired to detect polarized light across a broad swath of the visible and infrared spectrum.

“Detecting polarized light is extremely useful,” said Rice’s Junichiro Kono, professor of electrical and computer engineering and of physics and astronomy. “Many animals and insects can see polarized light and use it for navigation, communication and more. Humans can’t see polarized light, so we rely on devices to do that for us.”

Most devices can’t detect polarized light directly. Instead, engineers place a grate or filter in front of the detector.

“Our photodetector discerns polarized light intrinsically, much like the photoreceptors in the eyes of animals and insects that see polarized light,” said François Léonard at Sandia National Laboratories, one of the lead researchers on the study.

Polarized light consists of individual electromagnetic waves oscillating parallel to one another. The effect is created when light reflects from a transparent material, which is why polarized sunglasses reduce the glare from water, glass and other surfaces. Astronomers use polarized light in a number of ways, and there are a number of applications for polarimetry in communications and the military.

Rice’s new photodetector is the latest development from a collaboration between Rice and Sandia under Sandia’s National Institute for Nano Engineering program, which is funded by the Department of Energy. In February, Kono, Léonard and colleagues described a new method for making photodetectors from carpets of carbon nanotubes — long, narrow tubes of pure carbon that are about as wide as a strand of DNA.

The nanotube carpets used in the photodetectors are grown in the lab of Rice chemist Robert Hauge, who pioneered a process for growing densely packed nanotubes on flat surfaces. Xiaowei He, a graduate student in Kono’s group, found a way to use Teflon film to flatten these tightly packed nanotubes so that they are aligned in the same direction. Each carpet contains dozens of varieties of nanotubes, and about two-thirds of the varieties are semiconductors. Because each of the semiconducting varieties interacts with a specific wavelength of light, Kono’s team was able to show in its earlier work that the flattened, aligned carpets of nanotubes could serve as broad-spectrum photodetectors.

In the ACS Nano study, lead author He used chemicals called “dopants” to alter the electrical properties of the nanotube carpets. He created two types of carpet, one with positively charged carriers (p-type) and another with negatively charged carriers (n-type). By overlapping sections of these two, He and colleagues created a device called a p-n junction, which is a fundamental building block of microelectronics.

“Our work provides a new path for the realization of polarization-sensitive photodetectors that could be enabled on flexible or nonplanar surfaces,” He said.