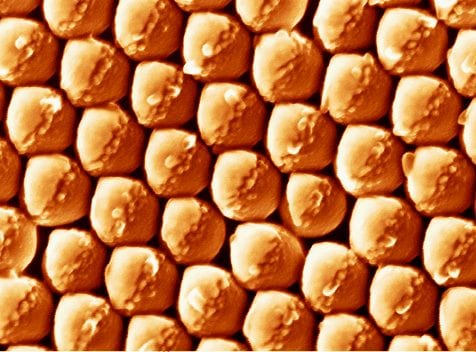 A novel hybrid systems where gold nanocrescents are evaporated over artificial opals has shown unexpected optical properties. A multidisciplinary team of scientists from the Department of Chemistry & Industrial Chemistry and the Department of Physics of the University of Genoa (Italy) prepared this novel nanostructured system where the plasmonic and photonic resonances combine when a suitable size scale is selected.

The researchers’ aim was conjugate the potential of photonic crystals (artificial opals) with that of highly ordered disconnected gold nanocrescents supporting localised plasmon resonances, in order to obtain a novel functional material which could be envisaged as a new platform for sensing or lasing. This is possible since light signals, confined to propagate at the interface between the strongly anisotropic nanocrescents and the opal photonic crystals, feel and amplify the effects of both media. The two systems are in fact individually the object of intense research efforts with the aim of spectrally manipulating, confining and amplifying the local electromagnetic field.

In order to unambiguously identify the role of hybrid photonic crystal-plasmonic modes, the authors have prepared and characterized nanocrescent arrays not only on artificial opals, but also on a single monolayer of nanospheres and compared them with the optical signature of a reference bare opal.

The optical response of the nanocrescents is strongly anisotropical due to the particular shape of such nanostructures and supports three plasmonic resonances which scale differently with the crescent size.

The final result is particularly appealing since, by properly selecting the size of the nanospheres which compose the opal and then of the nanocrescents, it is possible to spectrally tune the optical modes inside the opal to the resonance frequency of a localised plasmon, thus leading to the formation of a novel hybrid excitation with a mixed character.