Procedure spins extremely tough filaments from tiny cellulose fibrils by aligning them all in parallel during the production process. 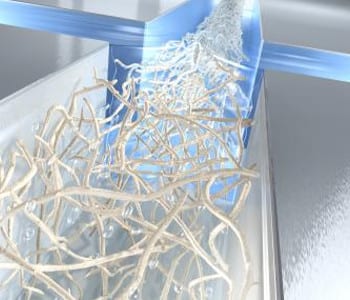 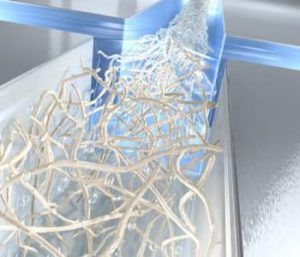 Artist’s impression of the production of ultra-strong cellulose fibers: The cellulose nano fibrils flow through a water channel and become accelerated by the inflow of additional water jets from the sides. The acceleration lets all fibrils align with the direction of flow, finally locking together as a strong fiber. Image: DESY/Eberhard Reimann.

A Swedish-German research team has successfully tested a new method for the production of ultra-strong cellulose fibres at DESY’s research light source PETRA III. The novel procedure spins extremely tough filaments from tiny cellulose fibrils by aligning them all in parallel during the production process. The new method is reported in the scientific journal Nature Communications.

“Our filaments are stronger than both aluminium and steel per weight,” emphasizes lead author Prof. Fredrik Lundell from the Wallenberg Wood Science Center at the Royal Swedish Institute of Technology KTH in Stockholm. “The real challenge, however, is to make bio based materials with extreme stiffness that can be used in wind turbine blades, for example. With further improvements, in particular increased fibril alignment, this will be possible.”

For their method, the researchers took tiny, nanometre-sized cellulose fibrils and fed them together with water through a small channel. Two additional water jets coming in perpendicular from left and right accelerate the fibril flow. “Following the acceleration, all nano fibrils align themselves more or less parallel with the flow,” explains co-author Dr. Stephan Roth from DESY, head of the experimental station P03 at PETRA III where the experiments took place. “Furthermore, salt is added to the outer streams. The salt makes the fibrils attach to each other, thereby locking the structure of the future filament.”

Finally, the wet filaments are left to dry in air where they shrink to form a strong fibre. “Drying takes a few minutes in air,” explains co-author Dr. Daniel Söderberg from KTH. “The resulting material is completely compatible with the biosphere, since the natural structure of the cellulose is maintained in the fibrils. Thus, it is biodegradable and compatible with human tissue.”

The bright X-ray light from PETRA III enabled the scientists to follow the process and check the configuration of the nano fibrils at various stages in the flow. “Research today is driven by cross-disciplanary collaborations,” underlines Söderberg. “Without the excellent competence and possibilities brought into the project by the team of DESY’s experimental station P03 this would not have been possible.”

As the scientists write, their fibres are much stronger than all other previously reported artificial filaments from cellulose nano fibrils. In fact, the artificial filaments can rival the strongest natural cellulose pulp fibres extracted from wood at the same degree of alignment of the nano fibrils. “In principle, we can make very long fibres,” says Lundell. “Up until now we have made samples that where ten centimetres long or so, but that is more of an equipment issue than a fundamental problem.”

For their experiments, the researchers have used nano fibrils extracted from fresh wood. “In principle, it should be possible to obtain fibrils from recycled paper also,” says Lundell. But he cautions: “The potential of recycled material in this context needs further investigations.”