Mark G. Allen has been named the inaugural scientific director of the University of Pennsylvania’s Krishna P. Singh Center for Nanotechnology. 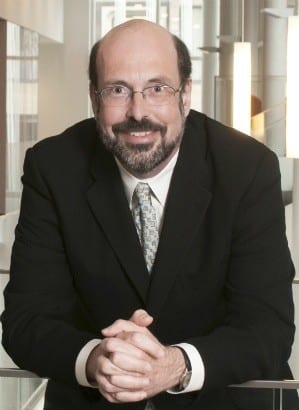 Mark G. Allen has been named the inaugural scientific director of the University of Pennsylvania’s Krishna P. Singh Center for Nanotechnology. The Singh Center, located on Walnut Street on the eastern edge of Penn’s campus, houses state-of-the-art nanotechnology facilities that will enable researchers in the Penn community and the surrounding area to make critical advances in this growing field.

Combining insights from the worlds of electrical engineering, mechanical engineering, chemistry and materials science, Allen is a pioneer in the field of micro-electromechanical systems, or MEMS, and nanofabrication technology. His research allows the creation of structures, sensors and actuators that exploit the unique potential of the small scale. For example, such miniscule devices can sit at the intersection of the biological and the digital, sensing the physical and electrical signals found in the heart and in the brain and transmitting them to computers for processing.

“The connection between basic research and applied technology is at the heart of the Singh Center’s mission — to be a local, national and global hub for generating groundbreaking nanotechnology applications,” said Penn President Amy Gutmann. “Mark Allen’s outstanding scholarship, strong industry relationships and proven leadership abilities are among the many qualities that make him the perfect fit as the Singh Center’s inaugural Scientific Director.”

Allen’s academic appointment will be within the School of Engineering and Applied Science’s Department of Electrical and Systems Engineering, though the Singh Center’s work will span Engineering, the School of Arts and Sciences and beyond. Allen has published approximately 120 journal articles, holds approximately 40 patents and is also the co-founder of several spinoff companies, including CardioMEMS and Axion Biosystems.

“The Singh Center for Nanotechnology will be transformative for the University,” said Eduardo Glandt, dean of the School of Engineering and Applied Science. “It will not only enable world-class academic research and teaching using state-of the art facilities but also have economic impact in the region through corporate relations, entrepreneurship and innovation.”

Allen is a Penn alumnus, receiving a B.A. in chemistry and a B.S.E. in chemical engineering and electrical engineering. He received a Ph.D. in microelectronics from the Massachusetts Institute of Technology in 1989. Allen then joined the faculty of the School of Electrical and Computer Engineering at the Georgia Institute of Technology, where he is currently Regents’ Professor and holds the J.M. Pettit Professorship in Microelectronics, as well as a joint appointment in the School of Chemical and Biomolecular Engineering. From 2007 to 2010, he was senior vice provost for research and innovation. In 2011, he was named executive director of the Institute for Electronics and Nanotechnology, which supervises and coordinates Georgia Tech’s research activities from nanotechnology to electronics and manages the university’s nanotechnology infrastructure investments.

As scientific director of the Singh Center, Allen will oversee the operation of the facilities, which include a 10,000-square-foot cleanroom and a suite of characterization and fabrication laboratories. He will also serve as a polestar for Penn’s research in nanotechnology and related fields.

“In Mark Allen, we have found a researcher who is a true leader and who has demonstrated how best to use the ideas and discoveries of the basic sciences in shaping the future of nanotechnology,” Rebecca Bushnell, dean of Arts and Sciences said.

The Singh Center was made possible by a $20 million gift by Krishna P. Singh. Singh is the founder, president and chief executive officer of Holtec International in Marlton, N.J., an energy-technology company he established in 1986. He is a member of Penn’s Board of Trustees and the SEAS Board of Overseers and has served as an adjunct professor of mechanical engineering at Penn. He received his Ph.D. in mechanical engineering in 1972 from Penn and a master’s in engineering mechanics in 1969, also from Penn.

The Singh Center will be formally dedicated at a ceremony on Oct. 4.