A robust and reproducible method for "direct programming" of acinar cells into functional beta cells with a polycistronic viral construct and viral transduction of pancreatic tissue in vivo in mice is described. 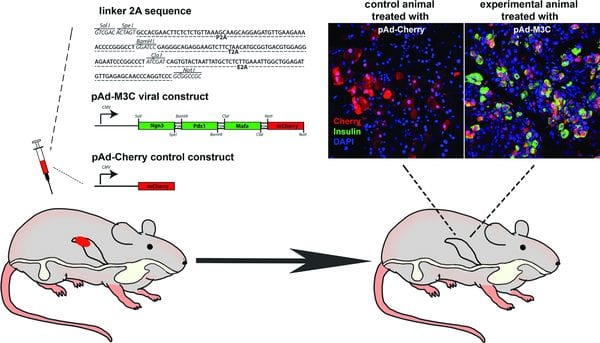 Type 1 diabetes results from autoimmune destruction of insulin-producing beta cells. Despite its incidence among children and growing prevalence, daily insulin injections remain the primary form of type 1 diabetes management. Lack of complete glucose control by insulin injections leads to severe complications and mortality among diabetes patients. Beta cell regeneration and replacement offers a promising new treatment option. Current studies in this area are directed towards identifying new methods for cell programming whereby one differentiated cell type can be converted to another. 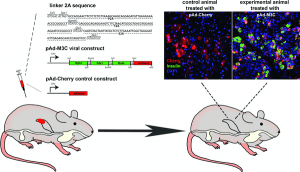 In the February Supplement of Current Protocols in Stem Cell Biology, Qiao Zhou‘s group at Harvard University, describes a robust and reproducible method for “direct programming” of acinar cells into functional beta cells with a polycistronic viral construct and viral transduction of pancreatic tissue in vivo in mice.

The protocol details: a) the generation of the polycistronic viral vector carrying three beta-cell reprogramming factors — Pdx1 (P), MafA (M), and Ngn3 (N) — collectively called PMN – into the acinar cells of the pancreas, and b) the production and tittering of the viral vector for a purified preparation suitable for in vivo transduction in mice.

This protocol has been used to facilitate optimization of reprogramming conditions. For instance, by using this method authors identified normoglycemia as a critical physiological determinant of reprogramming success. This method can also be used to evaluate the long-term behavior of reprogrammed beta cells and identify factors influencing the acinar to beta cell fate switch. Moreover, information obtained using this protocol is essential for adapting this promising strategy to clinical applications.

CPSC is a peer-reviewed monthly journal published on-line in association with the ISSCR and indexed in Medline.