Micro and nanorobots are promising candidates for targeted therapeutic interventions and controlled drug delivery because of their ability to control their locomotion and thus allow accurate targeting. A mobile micro or nanorobot, which can be externally triggered, and that uses the same external power source, independently for both locomotion and for on‐demand triggered therapeutics would be progress. However, avoiding interference between these tasks is challenging.

Salvador Pané and colleagues from ETH Zürich, and Oak Ridge National Laboratory, explain in Advanced Materials how they fabricated FeGa@P(VDF‐TrFE) core–shell magnetoelectric nanowires and demonstrated that they can be actuated and triggered using different magnetic fields for targeted drug delivery to kill cancer cells.

The nanowires are able to load the anticancer drug paclitaxel after surface functionalization using polydopamine, and release the drug upon the application of alternating magnetic fields (see image below). The researchers demonstrate precise magnetic maneuvering capabilities on a patterned surface, and 3D swimming using low amplitude rotating magnetic fields.

Distinct magnetic stimuli resulting from the same energy source – alternating magnetic fields for drug release and rotating magnetic fields for nanowire steering – enable these devices to carry and deliver drugs effectively to the targeted site while minimizing side effects of drugs administered systemically. The proposed nanorobots represent a further step in the development of miniaturized magnetoelectric platforms for biomedical applications. 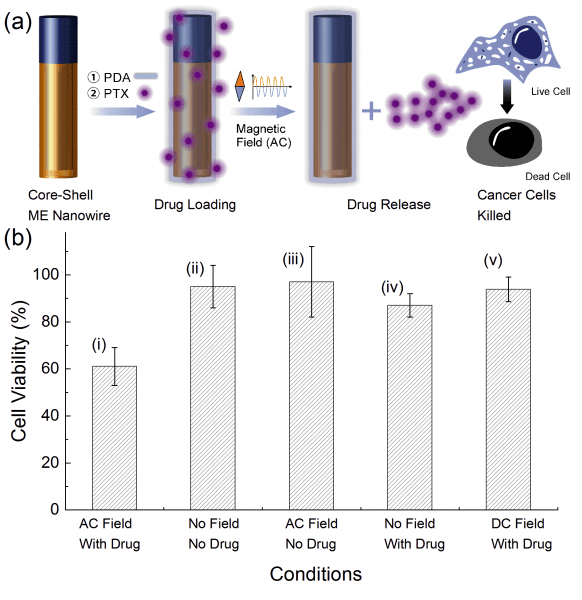