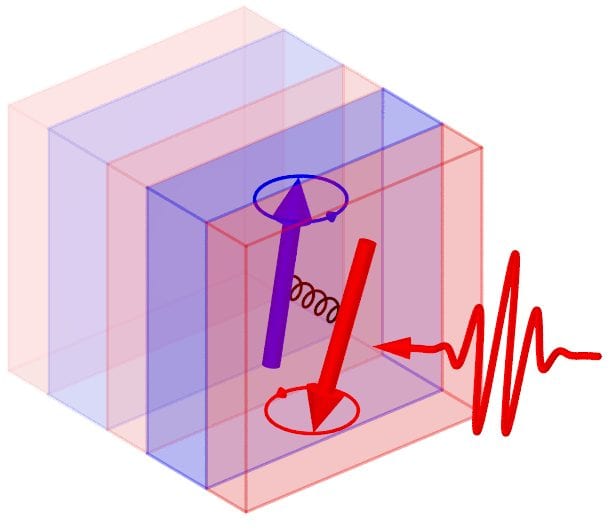 It is nowadays widely spoken of photonic and plasmonic crystals: periodic structures in one, two or three dimensions, those properties with respect to light-matter interaction are very different from single layers or unit cells. The bright future of this material engineering is guaranteed by a number of potential applications of quantum optics, as well as light conversion and harvesting. Less known are the applications of the mentioned approach to magnetism and especially to the magnetisation dynamics. 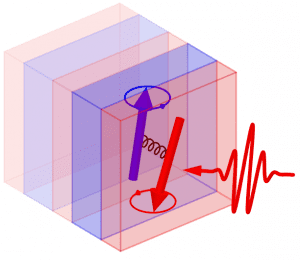 In their recent work, researchers from Radboud University Nijmegen and their colleagues from Leipzig and Stuttgart realized this approach on a periodic multilayer structure consisting of two very unalike magnetic oxides.

The time-resolved magneto-optical response of a magnetically coupled multilayer demonstrated pronounced oscillations corresponding to the coherent precession of both magnetisations around their common equilibrium direction. The laser-induced heating, unable to excite the coherent dynamics in single films, displacively drives the precession in a multilayer placed in the external field up to several Tesla. Moreover, strong magnetic anisotropy, yet another effect of the multilayer stacking, ensures the preferred in-plane orientation of both magnetisations, resulting in the unusual peaking of the amplitude of the oscillations at about 1 Tesla. The strong expected influence of the thicknesses of the oxide films makes the multilayer oxide stacks a promising object for future engineering and design of magnetic media and their magneto-optical response.

This text is kindly provided by Ilya Razdolski