A research team have reported a novel and versatile strategy to assemble inorganic NPs into sub-50 nm vesicles. 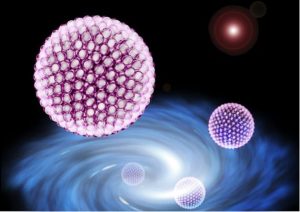 The self-assembly of inorganic nanoparticles (NPs) is an attractive strategy to design and fabricate new well-defined functional nanoarchitectures. Among which, nanovesicles have drawn great attentions in a broad range of applications including catalysis, sensors, bioimaging, and drug delivery due to their hollow structures and collective properties of NPs. Currently, other from templated assembly of inorganic NPs at the interfaces, such vesicles can also be assembled in homogeneous solvents with the help of amphiphilic polymers. However, these vesicles are usually at the size larger than 100 nm, which obviously restricts their applications in biomedication, and so on.

Recently, a team led by Prof. Tierui Zhang at the Technical Institute of Physics and Chemistry, CAS (China), Prof. Zhiyong Tang at the National Center of Nanoscience (China) and Prof. Zhihong Nie at University of Maryland (US) reported a novel and versatile strategy to assemble inorganic NPs into sub-50 nm vesicles with single or multiple layers of NPs in the membranes under UV light irradiation.

This new approach is very attractive for preparing vesicular structures since light is non-invasive and controllable in both time and space. Better still, unlike commonly used sophisticated photo-responsive ligands, this strategy is based on the photo-oxidation of simple and commercial thiol ligands modified to the surface of NPs. Moreover, the authors also demonstrated that this strategy is versatile to assemble a variety of metal and semiconductor NPs, including Au NPs, Pd NPs, Pt NPs and CdSe quantum dots (QDs), into nanovesicles.

Thanks to the unique porous, hollow and macroscopic structural features, nanovesicles assembled from NPs have significant advantages over individual NPs for many applications. Remarkably, when used in solar-driven hydrogen production, the as-prepared CdSe QD vesicles exhibit not only an improved catalytic activity but also an unprecedented catalytic stability compared with current popularly-used individual QDs. The reason for improved catalytic performances can be attributed to the higher efficiency light harvest of vesicular catalysts and their much more stable structures

In conclusion, this work not only provides a deep understanding of externally-triggered assembly of NPs into hierarchical and functional nanoarchitectures, but also creates numerous new opportunities for catalysis, bioimaging, drug delivery, and therapy applications.