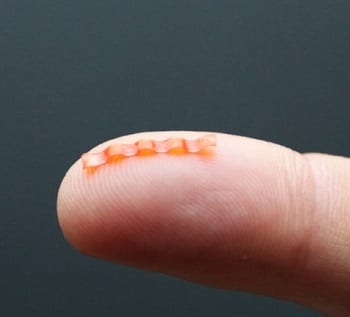 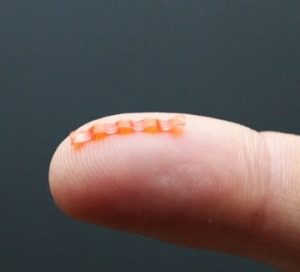 Have you ever observed a caterpillar meticulously inching its way on a leaf? Scientists have now created a tiny creature that can follow its wild cousins. A light-driven soft micro robot has been fabricated to mimic caterpillar locomotion in natural scale. It doesn’t require any electric wiring or batteries – instead it is powered and controlled by light. Unlike conventional robots, having rigid skeletons, the 15 mm long robot is made of soft polymer, capable of elastic deformation.

Why caterpillar? Although the robot itself may not look much like a living caterpillar, the walking strategy it uses is directly inspired by the travelling wave motion – a sequential body deformation moving from tail to head. This specific movement may help scientists and engineers better understand locomotion in the micro world and look for novel design of efficient robotic systems.

How it works? The robot’s body is made of a smart material – liquid crystalline elastomer – which forms the animal soft body and at the same time acts as a monolithic muscle. Special treatment allowed scientists to pattern this material at the single millimeter scale, and thus control the molecular order in the elastomer to induce a curling deformation under light stimulus. A laser beam is used to actuate different segments on the robot, driving it forward in a stepping gait.

What else? Apart from walking on flat surfaces, climbing a slope and pushing objects (as heavy as six times the robot’s mass) was demonstrated. Thanks to its soft, adaptable body, the robot is also capable of squeezing through narrow slits. This flexibility, enabled by the self-adaptive behavior of soft robots, hasn’t been studied at the micro scale so far. The millimeter-scale robot is the first demonstration of caterpillar-like locomotion in this length scale and may be followed soon by more elastomer animal species.