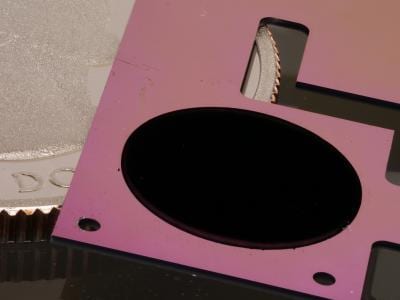 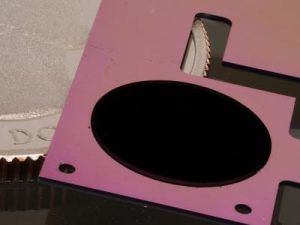 The circular patch of carbon nanotubes on a pink silicon backing is one component of NIST’s new cryogenic radiometer, shown with a quarter for scale. Gold coating and metal wiring has yet to be added to the chip. The radiometer will simplify and lower the cost of disseminating measurements of laser power. Image: Tomlin/NIST.

The National Institute of Standards and Technology (NIST) has demonstrated a novel chip-scale instrument made of carbon nanotubes that may simplify absolute measurements of laser power, especially the light signals transmitted by optical fibers in telecommunications networks.

“This is our play for leadership in laser power measurements,” project leader John Lehman says. “This is arguably the coolest thing we’ve done with carbon nanotubes. They’re not just black, but they also have the temperature properties needed to make components like electrical heaters truly multifunctional.”

NIST and other national metrology institutes around the world measure laser power by tracing it to fundamental electrical units. Radiometers absorb energy from light and convert it to heat. Then the electrical power needed to cause the same temperature increase is measured. NIST researchers found that the mini-radiometer accurately measures both laser power (brought to it by an optical fiber) and the equivalent electrical power within the limitations of the imperfect experimental setup. The tests were performed at a temperature of 3.9 K, using light at the telecom wavelength of 1550 nanometers.

The tiny circular forests of tall, thin nanotubes called VANTAs (“vertically aligned nanotube arrays”) have several desirable properties. Most importantly, they uniformly absorb light over a broad range of wavelengths and their electrical resistance depends on temperature. The versatile nanotubes perform three different functions in the radiometer. One VANTA mat serves as both a light absorber and an electrical heater, and a second VANTA mat serves as a thermistor (a component whose electrical resistance varies with temperature). The VANTA mats are grown on the micro-machined silicon chip, an instrument design that is easy to modify and duplicate. In this application, the individual nanotubes are about 10 nanometers in diameter and 150 micrometers long.

By contrast, ordinary cryogenic radiometers use more types of materials and are more difficult to make. They are typically hand assembled using a cavity painted with carbon as the light absorber, an electrical wire as the heater, and a semiconductor as the thermistor. Furthermore, these instruments need to be modeled and characterized extensively to adjust their sensitivity, whereas the equivalent capability in NIST’s mini-radiometer is easily patterned in the silicon.

NIST plans to apply for a patent on the chip-scale radiometer. Simple changes such as improved temperature stability are expected to greatly improve device performance. Future research may also address extending the laser power range into the far infrared, and integration of the radiometer into a potential multipurpose “NIST on a chip” device.

Magnesium Batteries: An Alternative to Lithium?
Toward a Universal Influenza Vaccine
Tuning nanoparticle shape and size by genetic engineering of bacteria
A pair of micro-pliers grown on hair-sized optical fibers