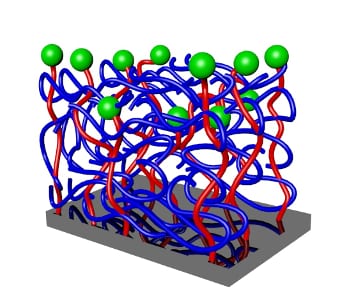 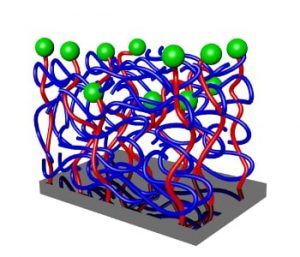 It is undeniable that polymeric thin films are found in a diverse of range applications across many fields. Scientists and engineers are constantly developing new methodologies to improve film fabrication processes that, for instance, enable the incorporation of multiple chemical functionalities or facile tuning of physical properties (such as thickness, density and stiffness).

A team of researchers led by Qiao and Caruso from The University of Melbourne (Australia) has recently developed an efficient and versatile film fabrication method, termed continuous assembly of polymers (CAP), to fabricate chiral stationary phases with nanoengineered features. The main working principle behind the CAP approach relies on controlled polymerization protocols to control the continuous growth of macrocrosslinkers – (bio)macromolecules functionalized with pendent polymerizable moieties – from initiator-functionalized surfaces to form surface-confined, cross-linked films in a single-step. As a proof of concept, the researchers demonstrated that the CAP approach can be utilized to build robust thin films composed of different types of functional polysaccharides on mesoporous silica particles, endowing the particles with chiral discrimination properties. They have also shown that chiral separation performance is dependent on the film thickness. Given that the film composition and thickness can be tailored efficiently via the CAP approach, chiral stationary phases with improved chiral discrimination over a range of racemates may be realized in the future.

Rapidly detecting sepsis at the point of care
Methods Perspectives: Assessing Battery Interfaces via NMR
Phase-Changing Metamaterials: A New Frontier in Technology
Protein Biohybrids as a Toolkit for New Materials