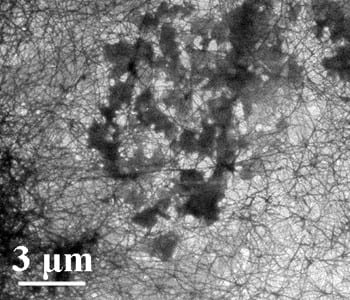 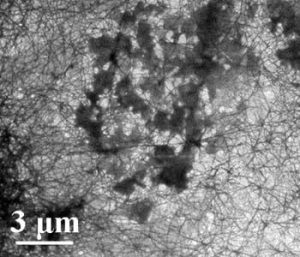 The incorporation of biological and biomimetic materials in electronic devices is of great interest in many applications, ranging from charge conduction and storage to biosensing. The use of peptides for these tasks is of particular interest due to the ability to control the structure and function of their nanometric assemblies by design and modification of the short amino- acid sequence. However, while charge transfer in biological systems, on one hand, and in synthetic organic systems, on the other, has been widely investigated, little is known about charge transport in self-assembled peptide structures.

In newly published researcher, Amit and co-workers use a variety of electrical characterization methods to show that ionic and electronic conduction occur simultaneously in self-assembled peptide nanostructures. In their design, based on the core sequence of amyloids, non-natural aromatic side chains of thiophene control the electronic conductivity, while hydrogen donor/ acceptor groups facilitate affective proton conduction channels. This leads to a unique bi-modal dependence of the conductance of the material on the relative humidity. These results demonstrate the simplicity by which self-organized peptide nanostructures can be adapted to a large range of applications that use either or both types of charge carriers for their function.

Breaking down a cell's barriers with a medicine-carrying nano-submarine
Microgel system for souped-up protein synthesis
A new, inhaled siRNA therapeutic option for asthma
A Knittable and Washable Conducting Yarn for Functional Textiles