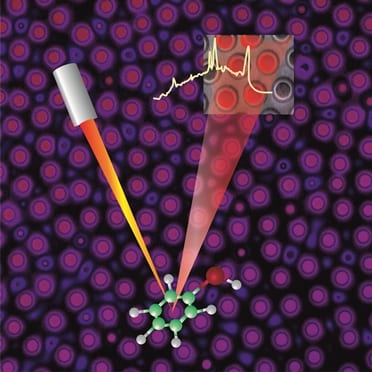 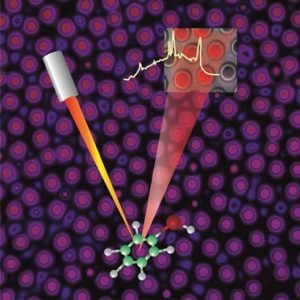 Surface enhanced Raman spectroscopy (SERS) is a powerful analytical technique that is based on the electromagnetic field enhancement by localized optical fields on a nanostructured metallic structure. Localized plasmon resonances can be tuned by manipulation of the surface architecture at the sub-micrometer level. Hence, controlled surface fabrication techniques underpin the development of next-generation plasmon-active devices such as those used in SERS.

U. Steiner and co-workers (University of Cambridge) have developed a novel approach that enables the fabrication of multiscale 3D structured arrays by using hierarchical electrohydrodynamic pattern formation. This harnesses sequential instabilities in multilayer thin films induced by an electric field. Thereby, the layer material is guided into designed structures, which allows pattering of different materials in a one-step procedure. They have extended the well-understood concept for polymer bilayers to polymer trilayers, which are placed between electrodes. By applying a specific temperature and voltage, the upper layer is destabilized and forms pillars. This paves the way for cylindrical pattern formation by the other components while the temperature is increased. Once such hierarchical pillars are formed, a variety of multiscale structures can be realized by dissolving some of the three polymers. Evaporating a thin gold layer onto a concentric pillar-rim structure resulted in a 107-fold SERS enhancement.

As the individual pillars function as isolated detection centers, these patterned substrates can be used for multiplexed SERS of different chemical species. Most importantly, the architecture of these well-defined sub-micrometer patterns can be tuned by controlling the fabrication parameters. This allows the structures to be optimized for SERS, which is an important requirement to obtain the highest enhancements.

The research is reported in the second issue of Advanced Optical Materials, the new section in Advanced Materials (2010 IF: 10.880) dedicated to breakthrough discoveries and fundamental research in the field of light-matter interactions. It includes communications, full papers, and reviews.