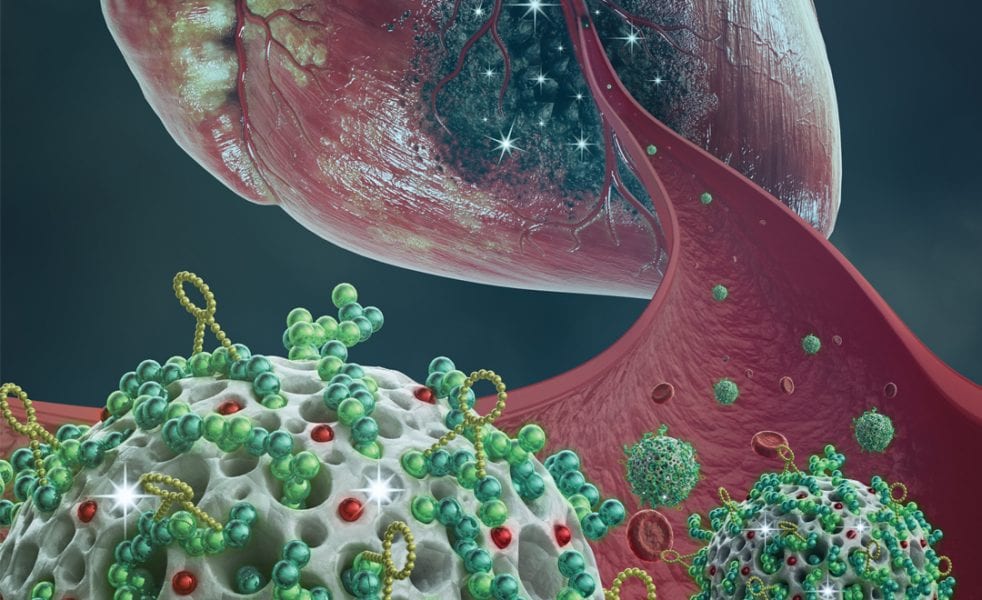 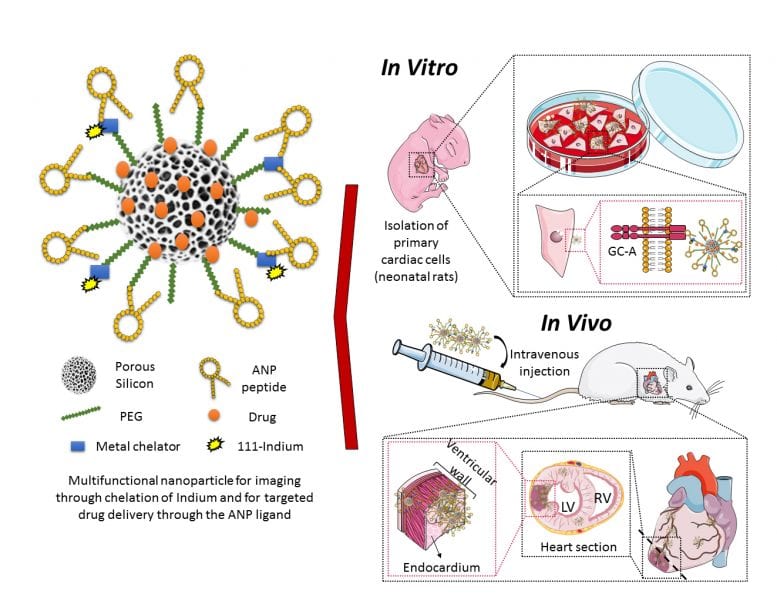 Schematic representation of the engineered multifunctional nanoparticle and its components, as well as an overview of the conducted in vitro and in vivo studies and main findings of this study. More information here.

Cardiovascular disease is the most common cause of death worldwide, with estimated 17 million deaths every year. Particularly, myocardial ischemia (MI, commonly known as heart attack) leads to a substantial loss of cardiomyocytes (the so called beating cells), causing negative remodeling of the heart characterized by hypertrophy and dilation, scar formation and ultimately leading to heart failure.

At present, the existing treatments have limited efficacy, require invasive surgical procedures and only bring small prolongation in patient survival. Therefore, therapeutic alternatives using small carrier particles have been explored with the aim to deliver medicines to the injured heart tissue, by means of less invasive administration methods such as intravenous injection. In a recently published article, M. P. A. Ferreira, H. Ruskoaho, A. J. Airaksinen, H. A. Santos, and co-workers, explored the potential of porous silicon nanoparticles as multifunctional drug carriers for intravenous administration, by targeting the heart after engineering the carrier surface with a heart-homing ligand.

In their study, the material toxicity and interaction mechanism of the nanoparticles with cardiac cells are elucidated. Subsequently, myocardial ischemia modeling rats received at least one dose of the mentioned nanoparticles. It was observed an increase in the heart accumulation of these targeted nanoparticles compared with the non-targeted ones of at least 1.5 fold. Further studies showed that these targeted nanoparticles tend to accumulate in the endocardium (inner layer of the left ventricle) and were accumulated specifically in hearts of MI model animals rather than in hearts of healthy animals. Finally, loaded heart-targeted nanoparticles delivered a drug to the targeted area and showed a promising cardio protective effect by modulating cellular processes involved in heart hypertrophy. This study opens up new avenues towards the development of targeted therapies for ischemic heart diseases using engineered drug delivery nanocarriers.

This work appears as the front cover article for Small Issue 33, 2017.

Left: Representative sagittal SPECT/CT images showing the biodistribution of the nanoparticles at 10 min after i.v. administration. Arrows indicate the location of the heart. Right: Representative H&E stainings and autoradiograms of apical, basal, and medial rat heart sections (from a single heart for each treatment. More information here.