The radiative emission rate of poly(3-hexylthiophene) could be greatly enhanced by integrating it into a plasmonic split-dipole nanoantenna. 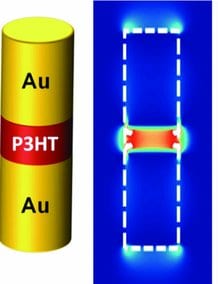 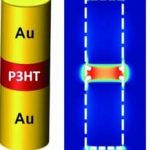 Resonant plasmonic nanoantennas have been used to control the emission of light to various degrees, as the large local density of optical states in the near-field of the nanoantenna influences its emission properties. Theoretical studies have proposed the incorporate of a semiconductor material into a metal nanoantenna, analogous to the feed element in radio frequency antennas, in order to modify the semiconductor’s optical properties. Until now, however, the realization of such an integrated metal–semiconductor nanoantenna has remained challenging.

D. O’Carroll (Rutgers University) and co-workers have developed a novel fabrication process for metal–polymer–metal split-dipole nanoantenna heterostructures by sequential electrodeposition and thermal evaporation. The resonant scattering response of such antennas can be tuned to the polymer emission band by controlling nanoantenna length. Using this approach, the radiative emission rate of poly(3-hexylthiophene) was enhanced by a factor of up to 29, in experiment, and 550 for the ideal case. In particular, organic conjugated polymers such as polythiophenes, which exhibit high carrier mobilities but possess relatively poor luminescence properties, would benefit from incorporation into such plasmonic nanoantennas. This work demonstrates clearly that integrated metal–polymer–metal nanoantennas could enable a new generation of high-performance conjugated polymer optoelectronic devices.

The research is reported in the second issue of Advanced Optical Materials, the new section in Advanced Materials (2010 IF: 10.880) dedicated to breakthrough discoveries and fundamental research in the field of light-matter interactions. It includes communications, full papers, and reviews.