Multilevel Molecular Assemblies: Scientists in China and Germany are working together to make efficient tools out of molecular assemblies. 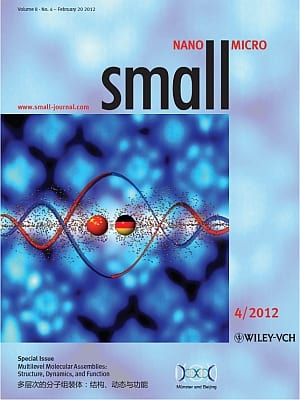 Scientists in China and Germany are working together to look very closely at how complex molecular assemblies work, and how they can be improved and harnessed to manufacture better and more efficient tools for people around the world.

TRR 61, or the Transregional Collaborative Research Center for “Multilevel Molecular Assemblies: Structure, Dynamics, and Functions”, was established in 2008 and supports about 150 research staff in Muenster and Beijing. The combined weight of the DFG (Deutsche Forschungsgemeinschaft) and the NSCF (National Science Foundation of China) is behind the project, providing powerful momentum. TRR 61 is the first project to bring these two national government science funding foundations together in a collaboration of this size and offers much through complementary cultural backgrounds and research organization.

Examples of the top-quality research from the first phase of the project have been collected together in a special issue of the journal Small, which deals with micrometer-sized materials down to those a thousand times smaller, on the nanometer scale. Guest editors from the University of Muenster (Harald Fuchs and Lifeng Chi), Tsinghua University (Xi Zhang), and the Chinese Academy of Sciences (Deqing Zhang) were invited to assist with the issue; all are members of the Executive Board of TRR 61. The issue comprises two review articles, one concept piece, seven communications, and seven full papers.

The research carried out by the interdisciplinary team of chemists, physicists, and biologists is inspired by the way large natural systems are assembled from numerous diverse small molecular structures. Known as “supramolecular systems”, these functional structures on the nanoscale display unique properties through collective interactions. According to the guest editors, it is the developments in synthetic chemistry which have enabled scientists to prepare the building blocks of functional molecules. Also, organized hybrid systems made of biological systems such as molecular motors with inorganic surfaces are investigated. “The understanding of the relation between chemical structures and properties with an increased integration of knowledge in chemistry, biology, and physics at the molecular level has contributed to the development of artificial systems, which, while being much simpler than natural ones, can perform rather complex tasks.”

The first phase of the project, covered by the special issue, focuses mainly on the underlying mechanisms of self-assembly, particularly concerning multiple interactions, co-operative effects, and dynamic behavior in the self-assembly process. Long-term goals aim at understanding and controlling properties and functions of the systems, especially electronic, optical, and sensing properties, where complex systems can outperform simpler conventional materials.

The specific topics under investigation by the project can be seen from the papers in Small. The reviews by L. F. Chi and Y. L. Li concern broad aspects: “Structure Formation by Dynamic Self-Assembly” and “Design and Self-Assembly of Molecular Machines on Nanoscale towards Functionalization”, respectively, while the concept article by H. P. Xu explores “Unconventional Layer-by-Layer Assembly: Surface Molecular Imprinting and Its Applications”.

Other papers show the diversity of research being carried out: from the modification of silica, which is often used as a base material (S. Oberhansl, H. Zacharias), to the exploration of photonic cyanide sensors by G. T. Li, via work on metal-ion sensors (D. Q. Zhang), Cucurbit[8]uril building blocks (G. T. Li), and dissipative tip–molecule interactions (G. Langewisch).

When asked about the importance of this collaboration, Prof. Fuchs replied, “We have created a very valuable research platform on which more new projects and outstanding scientific discoveries can develop, in particular due to the effect that we get two different cultural backgrounds and to a large extent also complementary research structures, equipment, and so on, coming together. The special issue is excellent proof that it flies.”