Nanowires can be produced by pulling DNA over micropillar arrays, leaving a simple overcoating step to improve conductivity. 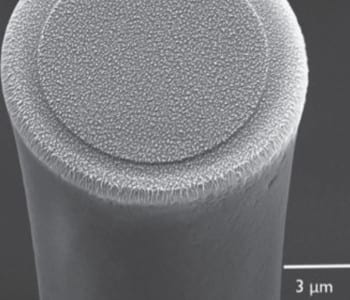 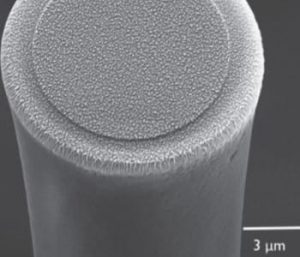 Bio-inspired approaches towards functional devices are attractive because they hold promise to exploit the tremendous potential for self organization in nature. To this end, DNA molecules represent a fundamental building block. However, when used in electronics, bare DNA has demonstrated very low conductivity. Therefore, additional functionalization with conductive materials is required, and many strategies have been developed in recent years.

Now, newly published research has shown how suspended DNA nanowire arrays and networks can be drawn by simply pulling a drop of DNA solution over a surface consisting of micro-pillar arrays. The team behind the work, from Italy and Saudi Arabia, demonstrate excellent control on the pattern design, which can be formed of linear, zig-zag, or crossed DNA nanowires. Electrical conductivity is achieved by overcoating these DNA nanowires with thin metal layers, which allowed the group to measure current on single suspended wires. Furthermore, they grew semiconductor ZnO nanorods onto the DNA wires to showcase the possibilities of extending their functionality in sensing, catalysis and microfluidics.